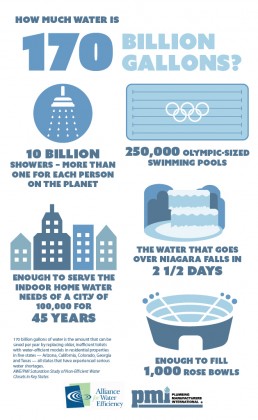 Water-efficient toilets could potentially save up to 170 billion potable gallons of water per year across five states facing water scarcity, says a new research released by the Alliance for Water Efficiency (AWE) and Plumbing Manufacturers International (PMI).

The “Saturation Study of Non-Efficient Water Closets in Key States” focused on Arizona, California, Colorado, Georgia and Texas – all states that have experienced serious water shortages.

The savings projected by the study (170 billion gallons of potable water yearly or 465 million gallons saved per day) could be achieved if non-efficient toilets in residential properties are replaced with water-efficient ones.

This five-state savings can be extrapolated to an estimate of up to 360 billion potable gallons of water per year saved nationally.

This research produces important direction for water managers nationwide, as 40 out of 50 states anticipate water shortages in the coming years, according to a Government Accountability Office survey of state water managers published in 2013, with most of these states already experiencing periodic shortages.

“This study affirms the important and sometimes overlooked role that water-efficient plumbing products – and programs such as the EPA WaterSense label – play in assuring water sustainability for our nation,” said Mary Ann Dickinson, AWE president and CEO. “We are nowhere near the potential of water savings we can achieve through water efficiency.”

Barbara C. Higgens, PMI CEO/executive director, said plumbing manufacturers are proud of the water-saving innovations they have brought to the marketplace. “Great water-efficiency innovations have already been made and are readily available. Now, it’s time for consumers and businesses to do their part to replace non-efficient toilets, showerheads and faucets with water-efficient ones,” she stated.

Non-efficient toilets defined as those using more than 1.6 gallons per flush

The five-state water savings estimate was calculated after the study’s research determined that more than 13 million non-efficient toilets, with gallons per flush (gpf) of more than 1.6 gallons, remain installed in Arizona, California, Colorado, Georgia and Texas residences. These 13 million toilets comprise about 21 percent of all toilets installed in these states; therefore, about 79 percent of installed residential toilets in these states are already efficient at 1.6 gpf or less.

Using the AWE/PMI study estimate of 170 billion gallons of water, these examples – illustrated in this infographic – show how much water can be saved within residential properties located in the five states included in the study: