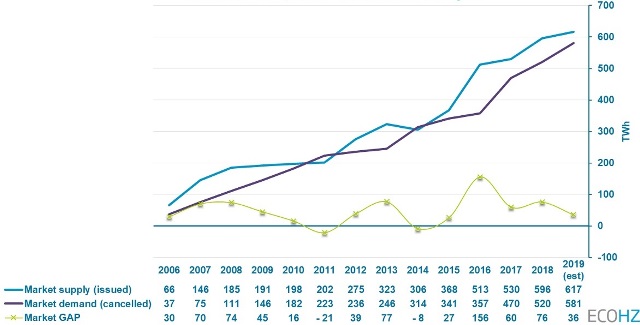 The European demand for renewable energy tracked and documented with Guarantees of Origin (GOs) grew at 11.7 percent in 2019, indicate the new statistics from the Association of Issuing Bodies (AIB).

The growth in supply of renewable energy tracked and documented with GOs is estimated to 3.5 percent, resulting in a significantly smaller surplus in 2019 than previous years.

“If the current development extends into 2020, the market will experience a rebalancing. This could have a direct impact on the pricing,” Tom Lindberg, managing director of ECOHZ, a provider of renewable energy solutions, said.

Sweden, France and Germany drive a large share of the renewable energy demand growth in 2019. These three countries with GO growth figures of 38 percent in Sweden, 26 percent in France and 10 percent in Germany drive a large part of the renewable energy demand in Europe. Sweden’s demand is 18 TWh and ends at an estimated 65 TWh in 2019. Germany defends its top position in the European renewable market by breaking “the 100 TWh mark” for the first time and is likely to surpass 110 TWh.

Despite that the UK is not an AIB member and used its own Renewable Energy Guarantees Origin (REGO) for many years rather than GOs, the UK still has had a direct impact on the European market balance for GOs. UK has allowed for import of EECS GOs (renewable power documented using the European standard EECS) for domestic consumption and usage. Demand for imported EECS GOs has grown year-by-year, mostly driven by the UK’s active renewable policy framework. Secondly, in 2019 we experienced a significant volume of exports of REGOs to the European market.

The French government announced that they would introduce auctioning of GOs in 2019, which had a direct impact on prices in 2019. The auctioned volumes came from power plants that received support and have not been able to issue GOs earlier. The auctions provided a mechanism for increasing supply in the market, in a fairly short timeframe. The players priced in the expected volume increase from the start, contributing to a downward price development throughout 2019.

The auctioning schemes would have an even more profound effect on the total supply volumes and market balance.

The market was, a few years back, dominated by a few large countries both on the supply and demand side. Germany has been the largest consuming market, but its share of the total supply has dropped every year. Norway supplied almost 60 percent of all EECS GOs 10-12 years ago – this share is now 20 percent.