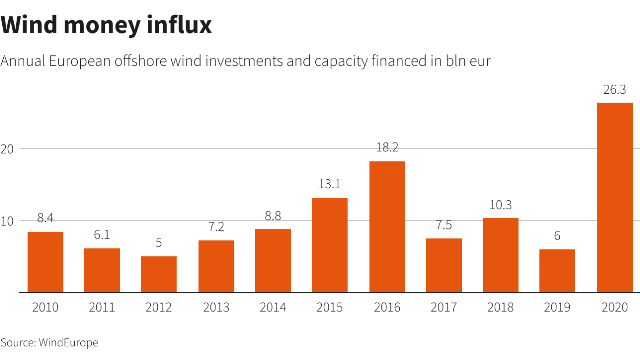 European utilities are offering a slew of offshore wind farms, eager to cash in on high valuations as investors hungry for stable returns increasingly flock to the sector, Reuters reported.

Demand for such assets has surged as environmentally-conscious investors and industries such as oil and gas seek green power in order to meet goals to achieve net zero emissions in line with the 2015 Paris climate agreement.

Denmark’s Orsted, Switzerland’s Axpo, Germany’s EnBW and Sweden’s Vattenfall are all marketing offshore wind assets that are either at project stage or completed, four people familiar with the matter said.

“There is a massive influx of capital and it is driven by pension funds and insurance companies,” said Mortimer Menzel, partner at Augusta & Co, which specialises in renewables deal advisory.

“It drives utilities to recycle their assets because, quite frankly, they’re getting a higher price today than they did last year and the window won’t be open forever,” he said, adding there was a huge scarcity of assets at the moment.

For utilities, selling stakes in farms or projects is part of their strategy to get these assets, which usually require spending of at last 1 billion euros ($1.2 billion) apiece, off the ground.

Orsted, the world’s No.1 developer of offshore wind farms, is in talks to sell part of its 900 megawatt (MW) Borkum Riffgrund 3 project to an investor in a deal worth up to 2 billion euros.

Glennmont Partners has been seen in pole position as a buyer but talks have not yet been finalised.

Meantime, Axpo has kicked off the sale of its 24.1 percent stake in the 400 MW Global Tech I farm, located about 100 kms (62 miles) off Germany’s North Sea coast.

Axpo has already approached potential buyers including owners of adjacent wind parks like APG and Macquarie as well as EnBW, which may be able to reap synergies from a potential combination.

Other investors in Global Tech I, which entered operation in 2015 and produces enough electricity to supply about 450,000 households, have also signalled their willingness to exit, and a buyer could get a majority in the business, the people said.

Valuations for renewables assets have soared, with the global FTSE cleantech index more than doubling over the past year on demand from investors, including oil majors who are under increasing pressure to find new sources of profit.

“However, big oil is likely to prefer to tread carefully when investing in renewables in the near term as they continue to adapt their financial frameworks and fulfil their dividend commitments.”

Despite the pandemic, 2020 has been a record year for offshore wind financing in Europe, climbing to 26.3 billion euros last year, according to industry body WindEurope.

EnBW is expected to mandate advisors for the sale of a stake in its 900 MW He Dreiht project, to be located about 110 kms west of Heligoland in the North Sea, in autumn, potentially launching an auction later this year or in 2022, the people said.

The company said that while for now its operating focus regarding He Dreiht remained developing the project until an investment decision has been taken, funding partnerships are part of its renewables business model.

In May, Vattenfall is expected to send out information packages in the planned sale of a stake in its Dutch 1.5 GW Hollandse Kust Zuid wind park, which is slated to go online in 2023, the people said.

Vattenfall, which communicated the sales plans last year, declined to comment on the timeline of the deal, adding that RBC Capital Markets is helping it to find an investor. “We call this asset ownership flexibility,” it said.

Spain’s Iberdrola is getting unsolicited bids for some of its wind farms, including Germany’s 476 MW Baltic Eagle project.

The company, which in 2019 sold a stake in its East Anglia One wind park, is looking for partners to finance the construction of Baltic Eagle.