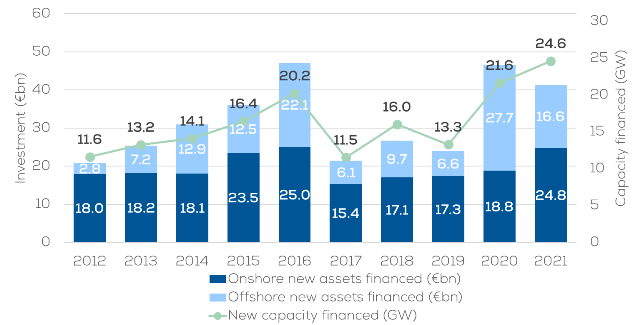 The investments are falling well short of the 35 GW a year of new wind the EU now needs to build to meet its 2030 climate and energy security targets.

Europe’s €41.4 billion investment in new wind farms in 2021 is 11 percent less than 2020. Investment for 24.6 GW of new capacity is a record for new capacity financed in a single year. Most of the new wind farms financed were onshore – 19.8 GW. Onshore wind is slightly cheaper than offshore.

The strong onshore wind investments show that Europe is starting to turn the corner on permitting. But the results are still far off from where Europe needs to be to reach its new climate change and energy security targets. The REPowerEU agenda wants the EU to expand its wind capacity from 190 GW today to 480 GW by 2030. This means building 35 GW of new wind turbines a year until 2030. The new wind investments in the EU in 2021 covered only 19 GW of new capacity.

A growing number of new wind investments are underpinned by contracts for difference (CfDs) that governments are offering in their renewables auctions. CfDs deliver stable revenues for project developers at low costs to Governments – because Governments only pay out when the electricity price is below the auction price but get paid back when it’s higher. CfDs also reduce finance costs because the clear revenue perspective means banks finance projects at favourable rates of interest.

2021 was a record year for corporate renewable Power Purchase Agreements (PPAs). 6.9 GW of new PPA deals were announced, raising the total amount of renewables under PPA by a massive 58 percent in one year alone to 18.8 GW. Wind was 60 percent of the PPA capacity with 41 new PPAs for onshore wind farms and 11 for offshore wind farms.