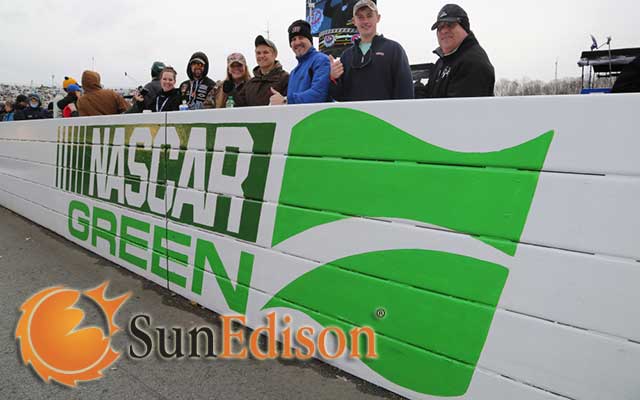 NASCAR Green in an innovative and holistic environmental awareness platform in the US. Its mission is to reduce the sport’s environmental footprint by championing sustainable behavior to millions of fans.

The partnership is aimed to expand the use of solar technology in motorsport, particularly at race team shops and race tracks across the US.

According to a statement, SunEdison and NASCAR will also educate motorsport fans about the financial and environmental benefits of solar power over the next three years.

Steve Phelps, the chief marketing officer of NASCAR said the strategic partnership with SunEdison “will help NASCAR further reduce the sport’s environmental impact and help to continue to educate fans on renewable energy”.

A study by Research Now conducted for NASCAR in 2014 showed that four out of five fans of motorsports believed in climate change, and two out of three among those felt personally responsible and wanted to do something about it.

Jason Chow, the executive president of Hanergy Global Photovoltaic Application Group, said the company was interested in developing its thin, lightweight and flexible solar panels for cars, to power ancillary functions of such vehicles without affecting the performance of the car or using its fuel or battery power.

“The engineers at Aston Martin Racing are helping us to apply our technology and eventually to put it to the test in the most extreme of automotive environments,” Jason said.

John Gaw, the principal of Aston Martin Racing’s team said they were looking at ways to use solar power to make race cars more comfortable for its drivers and in turn improve their performance on track.

The project was to run throughout last year till the World Endurance Championship, Six Hours of Austin, at the Circuit of the Americas.