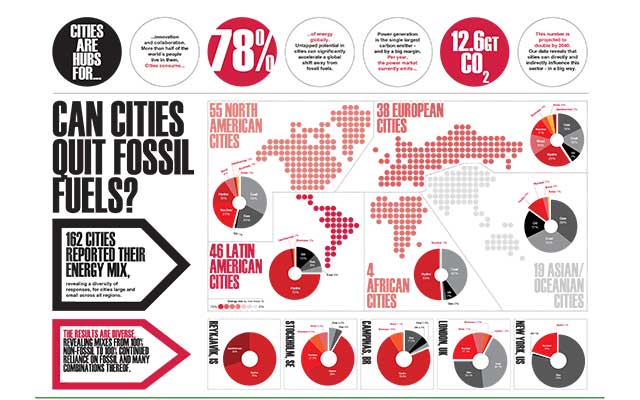 The CDP survey relies on self-reporting from cities as global data at city level is sparse. And it reveals vast gaps between cities relying on fossil fuels and those nixing them.

According to National Geographic’s report based on the survey, the cities of Brazil fared best of the lot. They reported clean energy share of 76 percent on average. The primary renewable energy source in these cities is hydropower. Their European counterparts averaged 59 percent, CDP data shows.

While, North American cities are not quite green, those of Asia-Pacific averaged only 15 percent on average in their share of cleaner energy sources such as nuclear, biomass, geothermal, hydro, solar, and wind.

Hong Kong is one coal and gas dependent city of Asia-Pacific which is employing financial incentives to boost investment in renewable energy.

In the US, Austin, Texas, aims to get 55 percent of its electricity from renewables by 2025. Stockholm and San Francisco are aiming for 100 percent by mid-century.

Twenty-one cities surveyed say they don’t use fossil fuels to produce electricity. Of these 16 cities are in Brazil and they rely entirely on hydropower.

Another 15 cities have declared that the share of clean energy in their mix is 90 percent. Paris, Oslo, Stockholm, Seattle, four cities in Brazil and four in Canada are the cities.

While most cities in the group rely heavily on hydropower, Toronto, Vancouver and Paris get about half their power from nuclear plants.

Eight other cities use fossil fuels to produce at least 90 percent of their power. Tokyo, Singapore and Seoul rely mostly on gas, Gibraltar (oil) and South Africa’ Cape Town (coal).

Further, eight cities have reported that they are entirely reliant on on oil, gas or coal to generate electricity. These include Sydney and Pretoria, which rely largely on coal, Moscow and Mexico City, which rely on gas, and Venezuela’s Caracas, which relies on oil.