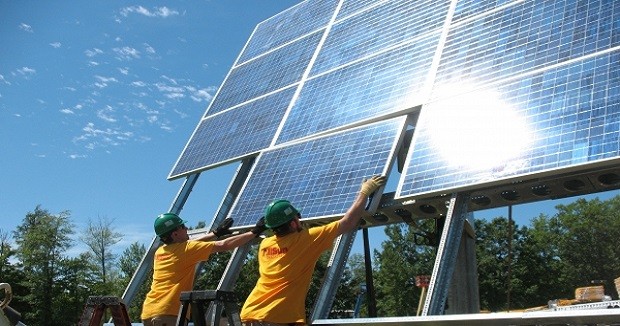 Solar panels from China dominated imports of the equipment into India in the first two months — April and May — of the ongoing fiscal.

According to a reply given in the Lok Sabha, the lower house of Indian Parliament, the Asian giant bagged 63 percent of the total imports of solar power panels in the said period.

Minister of State (in-charge) for Power, Coal and New and Renewable Energy Piyush Goyal stated in the reply that 1.9 crore panels were imported from China out of total imports of 3.02 crore panels.

China’s dominance has been growing in India’s solar panel imports according to the figures submitted by the minister.

In the fiscal before last (2013-14), the import of solar panels from China constituted more than 65 percent of the total. That amounted to 10.04 crore panels out of total import of 15.41 crore devices, the minister has informed the House.

In the previous fiscal India got 70 percent of its entire solar panel impofts from China. In numerical terms, that amounts to 11.35 crore out of 16.15 crore panels.

Taiwan and Malaysia were the other major contributors in the import segment.

At the same time, the domestic manufacturing capacity for solar cells and modules was 1,328 MW and 2,523 MW respectively.

The minister stated that the government was taking initiatives such as reduction/exemption of customs and excise duty on raw materials for manufacturing of cells and modules to promote local production.

India will need $1 trillion in energy investments by 2030