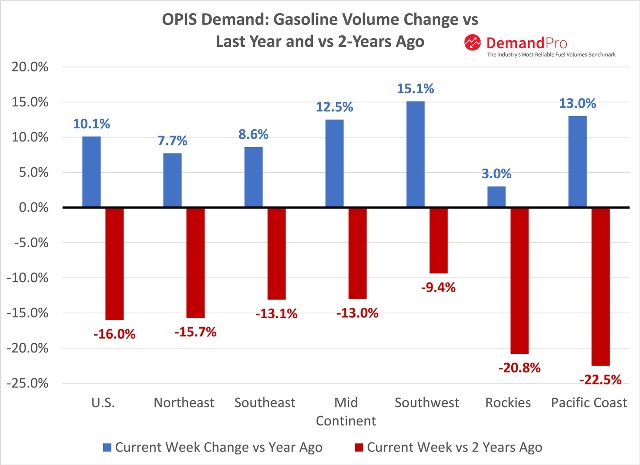 U.S. gasoline same-store sales in gallons for the week ending March 20, 2021 were 10.1 percent higher than 2020, according to OPIS Demand by IHS Markit, a weekly survey of more than 25,000 fuel stations in the US. Nevertheless, same-store gasoline sales were still 16 percent below pre-pandemic levels.

“The real measure of recovery will be a return to pre-pandemic levels,” Brian Norris, executive director of retail fuels, OPIS by IHS Markit, said.

Prior to the week ending March 20, 2021, gasoline volumes had mostly hovered in the range of 15 percent to 18 percent below prior-year levels since the start of 2021. The main exception was the week ending February 20, which saw a year-on-year decline of 22.4 percent due to impacts from Winter Storm Uri.

Retail gasoline sales volumes moving into positive territory compared to prior-year numbers for the week ending March 20 are not due to a major increase in demand but more reflect the massive declines that were seen at the pump during the same period last year.

The week ending March 21, 2020 saw volumes trail 2019 levels by 23.6 percent, the first week in a four-week stretch that saw weekly U.S. gasoline sales volumes plummet to levels not seen since the Nixon Administration was in office in the early 1970s, culminating with volumes 47.5 percent behind prior-year levels the week ending April 11.

The extent of the current rebound varies by region. The Southwest region surpassed 2020 volumes by 15 percent. Meanwhile, the Southeastern part of the United States surpassed 2020 levels by only 8.6 percent, largely due to many states in the Southeast not moving as quickly to mandated stay at home orders as the rest of the country did last year.

The regional disparity in gasoline demand recovery is apparent. California saw some of the earliest declines in gallons sold due to the west coast largely being the early epicenter of the COVID-19 pandemic in the United States.

Compared to last year, gasoline sales are up 14.6 percent in California, however volumes still trail same-week 2019 by 22.7 percent on a same-store basis.

Florida, on the other hand, was not as quick to enact quarantine mandates, and the data paints a very different demand picture. Fuel retailers in Florida saw a much-smaller 6.4 percent increase versus last year, but only trail demand levels from two years ago by 11.2 percent.

There is optimism that additional “pent up” demand could be released this summer, with the Biden Administration announcing that every adult in the U.S. will be eligible for the COVID-19 vaccine no later than May 1.

“The logic that gasoline demand will suddenly and permanently return to pre-pandemic levels fails to take into account the lingering effects of unemployment, dramatic cuts in urban, suburban and rural events, and hybrid models for commuting that allow for more people working from home,” said Tom Kloza, global head of energy analysis, OPIS by IHS Markit.