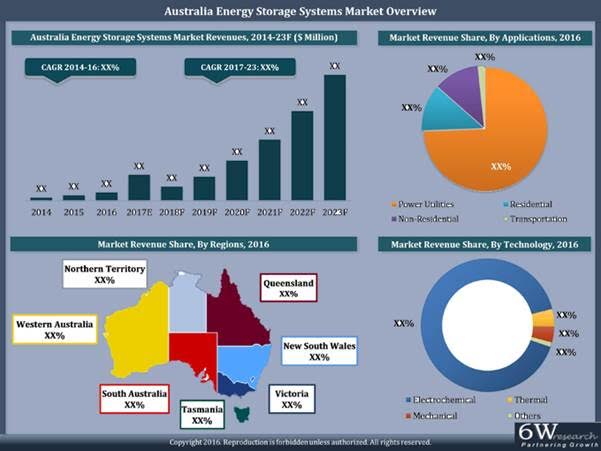 Australia energy storage systems market revenues are projected to grow at a CAGR of 30.1 percent during 2017-23, says 6Wresearch.

With increasing uptake of rooftop solar plus storage systems in households and predicted rise in the adoption of electric vehicles in future, the energy storage systems market in Australia is expected to register substantial over the next six years.

Large-scale storage projects such as Tesla’s 100 MW battery and Lyon Group’s $1 billion solar farm are presently under construction and with multiple power plus storage projects in pipeline, the sale of energy storage solutions is anticipated to witness rapid growth.

The residential and power utility sectors in Australia are the key revenue generating segments in energy storage landscape due to rapidly rising installations of rooftop solar PV. Due to expected fall in prices, the market share of lithium-ion and flow batteries would subsequently increase during the forecast period, according to 6Wresearch.

“The market for electric vehicles in Australia is presently in infancy stage but is expected to grow rapidly over the coming years. This impending increase in the uptake of electric vehicles would lead to an increase in the use of energy storage systems in the transportation segment,” Rachit further said.
Some of the major companies in Australia energy storage systems market include – LG Chem, Tesla, Sonnen, GCL-SI and Redflow.

Focus on costs alone leads to misconceptions about energy storage