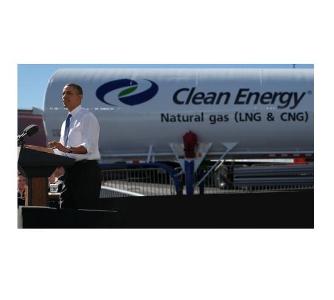 By
Greentech Lead Team: President Barack Obama spoke at the
UPS Depot in Las Vegas, Nevada promoting natural gas-fueled trucking as part of
his “Blueprint for an economy that’s built to last.”

President Obama proposed federal
initiatives favoring the use of natural gas for transportation, including
getting more natural gas vehicles on the road using federal fleets and helping
local governments upgrade their fleets.

“We applaud President Obama for
bringing this vital proposal to ‘make the most of America’s energy resources’
to the forefront and promoting ‘safe, responsible development of the near
100-year supply of natural gas’ in our country,” said Andrew J. Littlefair,
Clean Energy President and
CEO.

The newest Clean Energy fueling
station on the Highway is located in Las Vegas nearby the UPS Depot and
provides the link for trucking between Los Angeles and Salt Lake City, a vital
goods movement corridor in the Southwest.

The government program provided
funds to assist UPS in purchasing its new fleet of 48 natural gas-fueled trucks
based at the Las Vegas Depot. Clean Energy signed a long-term contract with UPS
in 2011 to fuel this fleet.

Currently priced up to $1.50 per
gallon lower than diesel or gasoline (depending upon local markets), the use of
natural gas fuel reduces costs significantly for vehicle and fleet owners,
reduces greenhouse gas emissions up to 30 percent in light-duty vehicles and 23
percent in medium to heavy-duty vehicles.

Additionally, natural gas is a
secure North American energy source with 98 percent of the natural gas consumed
produced in the U.S. and Canada.