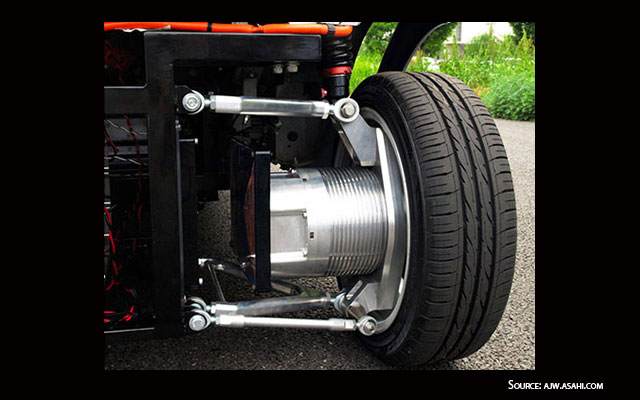 Researchers at University of Tokyo claim to have developed a technology for wireless transfer of electricity which they believe will help develop more advanced electric vehicles.

The team has incorporated the technology in the “world’s first in-wheel motor system for electric vehicles” that transmits power wirelessly to run motors attached with each wheel.

The new system transmits electricity from an onboard power source to a coil attached to the wheel hubs without wires.

The researchers say the system wirelessly transmits electricity stored in the vehicle’s batteries over a distance of 10 centimetres. Power from the batteries is passed to a transmitting coil from where it is transmitted over the 10-cm distance to a receiving coil attached to the wheel hub.

“This technology will pave the way for the development of electric vehicles that receive electricity wirelessly from transmitting coils embedded under road surfaces. It can be also applied to fuel-cell vehicles and industrial machinery,” Japanese newspaper Asahi Shimbun has quoted Hiroshi Fujimoto, an associate professor at the University of Tokyo specializing in electric vehicle control, as saying.

According to the researchers, the in-wheel motor, also known as wheel hub motor, is an electric motor incorporated into the hub of a vehicle’s wheels to directly drive each wheel.

The technology does away with the need for a drive shaft, which is part of conventional electric vehicles and mechanically transfers energy to all the wheels and drives them.

The new technology could help build lighter vehicles that require less energy. It should also allow greater control on acceleration and braking, and mitigates the risk of skidding.

Current cars that employ in-wheel motors depend on wires to transmit electricity and the complex wiring distribution combined with susceptibility to short circuits have hindered development of such a vehicle for practical purposes.

The researchers have also succeeded in running a motor using 3 kilowatts of electricity and sent control information to each wheel using standardized Bluetooth wireless technology.

And the researchers say the prototype rear-wheel-drive car they have developed can, in theory, run at 75kmph.