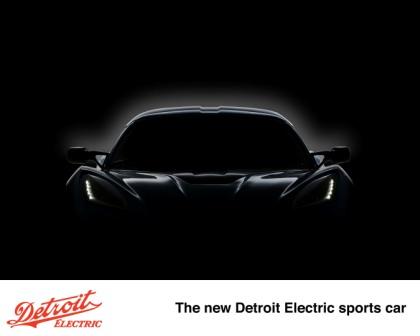 Greentech Lead America: Detroit Electric, the electric car manufacturer, has announced its re-entry to the legendary Motor City after an absence of over 70 years.

The company has opened its corporate headquarters on the 18th floor of Fisher Building, located in downtown Detroit and has unveiled a limited-edition two-seat sports car.

The electric car maker is preparing to launch the first ever pure electric sports car in Michigan. The company has identified a site for its assembly; production is expected to start in August.

The dedicated production facility will have an annual capacity of 2,500 sports cars.  Detroit Electric aims to create over 180 sales and manufacturing-related jobs over the next 12 months.

The first model to carry Detroit Electric logo will be a limited-edition two-seat sports car.  The new sports car will be launched early next month in Detroit, ahead of a global public reveal at the Shanghai Motor Show on 20 April.

The all-new electric sports car will be on sale in many of Detroit Electric’s target markets by end of August 2013. The sports car will spearhead a diverse family of all-electric production cars, including two other high-performance models that will enter production by end of 2014, the company said.

Don Graunstadt , CEO, North America Operations at Detroit Electric, said, “We are proud to become the fourth car manufacturer born out of Detroit, and the first to manufacture a pure electric sports car from Michigan. We are committed to doing our part for this great revival of Detroit through innovation, entrepreneurship and determination – what we like to call ‘Detroit 2.0’.”

“Detroit Electric’s decision to establish its new headquarters in Detroit is great news, because it builds on Michigan’s automotive heritage and places the company in the world’s automotive epicenter with a business climate that will enable its success,” said Michigan Economic Development Corporation president and CEO Michael A. Finney.