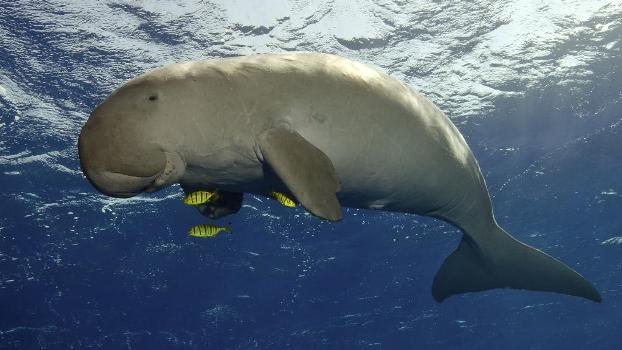 The endangered species, which is primarily threatened by entanglement in fishing gear, collision with boats and habitat loss, occurs across the East coast of Africa, South-East Asia, Pacific Islands and Australia.

Government officials, and the world’s leading dugong and seagrass experts, met this week in Abu Dhabi to discuss solutions to stop the rapid decline of dugongs and the seagrass meadows where they live.

Seagrass meadows support fisheries across the Indo-Pacific, and are increasingly recognized for their ability to help mitigate the impacts of climate change. They store carbon forty times faster than tropical rainforests.

Thirty-two per cent of the world’s 25 most landed fish species use seagrass as habitat at some stage in their life cycle. Yet, these highly productive habitats are being lost at rates faster than rainforests and coral reefs, putting at risk already endangered migratory species.

Seagrass meadows also support fishing communities, and their conservation can support poverty alleviation: in many developing nations, marginalized communities depend on seagrass and the multitude of animals that they harvest from them for their livelihoods.

Governments agreed to work with the Dugong and seagrass research and conservation community to undertake more standardized research and monitoring activities as a prerequisite for devising tailored conservation measures in their own countries. Better coordination of surveys and data exchange on Dugong populations between countries will improve transboundary protection.