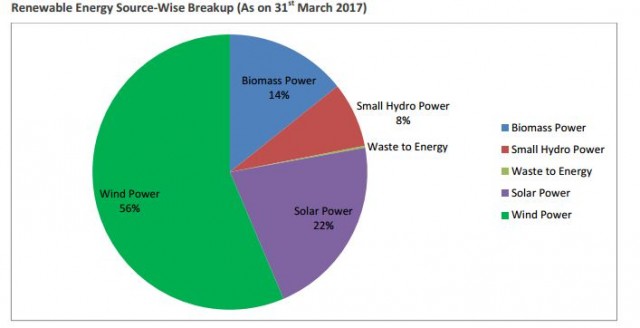 According to the latest CARE Ratings report, renewable energy contributes around 17.5 percent of total power capacity in India.

Among top seven countries globally with respect to installed renewable energy capacity, China and USA lead by a huge margin, whereas newer entrant India has rapidly inched upwards in the ranking with higher addition of renewable energy resources post 2014, the report said.

Renewable energy would lead the next phase of growth in power capacity addition, as the government would be keen to gradually cut on import of fuel for generation of electricity, the report said.

However, the magnitude of success and achieving set targets would solely depend on Government’s timely intervention and provision of incentives.

The major problems are in the area of finance and transmission as the budgetary allocations are minimal and the networks not adequate for delivery. Discoms too are not in a position presently to purchase such power given their financial conditions.

Going forward, more investment is expected coming through PEs, pension funds and FDI as demand picks up and cost of generation comes down progressively but gradually, the report said.

The potential for wind power generation for grid interaction in India has been estimated at about 1,02,788 MW taking sites having wind power density greater than 200 W/sq. m at 80 m hub-height with 2 percent land availability in potential areas for setting up wind farms @ 9 MW/sq. km.

The GST does now tax solar equipment, while wind would be taxed at a lower rate. Hence, it is a mixed package for this sector.

The increase in RPO was necessary to complement the government’s ambitious 100GW solar capacity addition target. However, with Discoms under UDAY scheme having weak finances, implementation of renewable projects could be impacted.