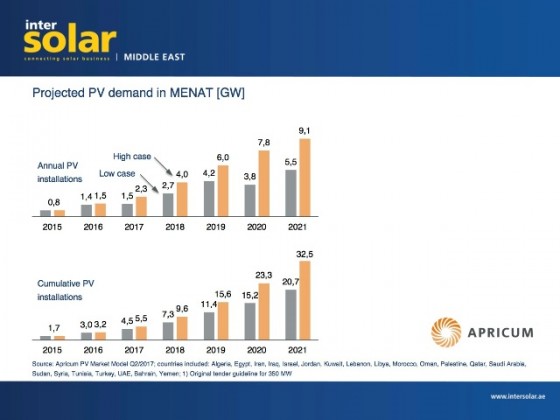 PV capacity is growing in MENAT countries thanks to investment in renewable energy initiatives in several nations.

The expected installed PV capacity in the MENAT countries will be 32.5 GW by 2022 from 3.2 GW in 2016 — achieving a 10-fold increase, or an annual addition of 6 GW PV, according to German research company Apricum.

Saudi Arabia plans for additional 9.5 GW of renewable energy by 2030. Jordan and Egypt are getting financial aids from international Banks to complete their targets.

Eicke Weber, former director of the Fraunhofer Institute for Solar Energy Systems ISE, financing is the biggest challenge in the PV sector.

“A lot of projects are on standby, because of the lack of financial interest. The other problem is that everyone wants to use local production, but it has yet to get going, which slows down the projects,” Eicke Weber said.

China dominates the global PV market. EnergyTrend estimates its cumulative installed solar capacity to hit 125 GW by the end of 2017. China, the U.S., India and Japan represent 75 percent of the world’s entire solar installation capacity for the year 2017.