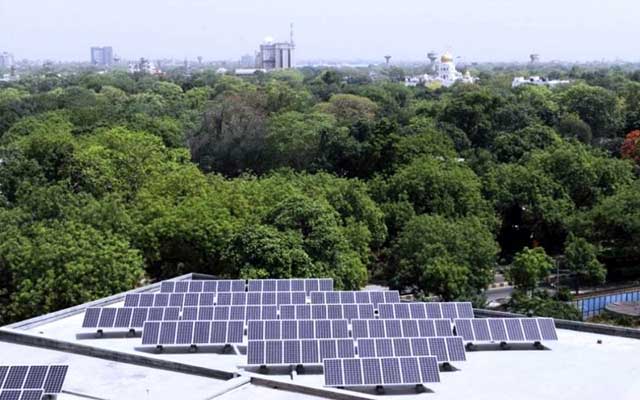 India, Africa to focus on solar at India-Africa Forum Summit.

IANS reports that climate change would be in focus at the India-Africa Forum Summit here this October with India proposing that the 54 African countries join a Solar Group of nations to tap the sun’s rays for energy while forming another grouping with the coastal countries to harness ocean wave energy.

As the October 26-30 mega diplomatic event draws near, officials are busy working on the details of the proposed Solar Group, that will include around 100 countries situated between the two tropics — of Cancer and Capricorn.

Prime Minister Narendra Modi has been stressing on boosting the production of solar energy, which he has described as the ultimate solution to India’s energy problem. India has set an ambitious target to generate 100 GW of electricity from solar energy by 2022.

While the UN climate conference (COP21) in Paris is slated for December, India will be looking at long-term cooperation with the African countries in sustainable development.

The Solar Group will comprise countries like India that could tide over their perennial energy needs by making optimum use of their abundant sunshine — and the whole of the African continent falls in this category.

Africa, whose economic growth rate has shown remarkable resilience despite the global slowdown and is blessed with abundant natural resources, minerals and fossil fuels, is struggling with a crippling power crisis.

According to the International Energy Agency, some 622 million people in Africa — or around half the population — are without electricity.

While the Solar Group is a mega concept, India has been helping to light up African homes using solar energy over the years through its novel concept of Solar Grandmothers.

India has, through the Barefoot College in Tilonia, Rajasthan, trained many African women from rural areas to become solar engineers and set up solar electricity units and maintain them. The women, when they return home, impart the knowledge to others, thus helping bring solar lighting to distant homes in Africa.

The solar grandmother project — fully funded by the government of India — has been one of India’s major success stories in developmental assistance in Africa. The Barefoot College, started by social activist and educator Bunker Roy in 1971, has set up several solar grandmother training centres in Africa.

Besides solar energy, Prime Minister Modi’s stress has been on renewable energy as part of measures to fight climate change. Tapping wave energy is set to form a major cooperation plank between India and the 54 African countries.

India, which has an over 7,000-km coastline, has the potential to generate 40,000 MW of wave energy, besides also harnessing the ample tidal energy. The African continent has 39 countries with a sea coast, including Mauritius and Seychelles. Harnessing the wave and tidal energy from the Indian and Atlantic Oceans could help meet Africa’s electricity needs.

The cooperation on tapping the oceans would not just stop at harvesting energy, but also extend to hydrography — or carrying out surveys of the water depth, information on the seafloor material (i.e., sand, mud, rock) which would have implications for anchoring, dredging, structure construction, laying of pipeline and cable, and fisheries habitat.

India is already cooperating with Seychelles and Mauritius in hydrography.

Blue economy, the newest buzzword in tapping ocean reserves and building the resilience of the marine ecosystems to combat climate change and ocean acidification, would also form part of the cooperation.