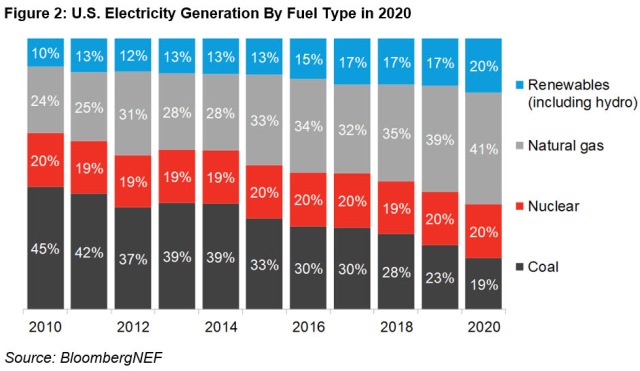 Natural gas and renewable generation expanded their share of the resource mix. A record 33.6 GW of wind and solar capacity was added to the grid this year.

Power from all zero-carbon sources (renewables plus nuclear power) set another record, meeting 40 percent of demand. This was despite a decline in nuclear output.

Coal-fired power’s contribution slipped to 19 percent from 45 percent a decade ago on weak demand and competition for lower-carbon power sources. Coal plants continued to retire rapidly.

A record 33.6GW of wind and solar combined was built. Records were also set for each individual technology. Wind enjoyed its strongest year ever with 17.1GW constructed while solar bested its previous 2016 high with 16.5GW completed.

26 states had acted to promote the use of renewable natural gas for thermal heating in homes and businesses.