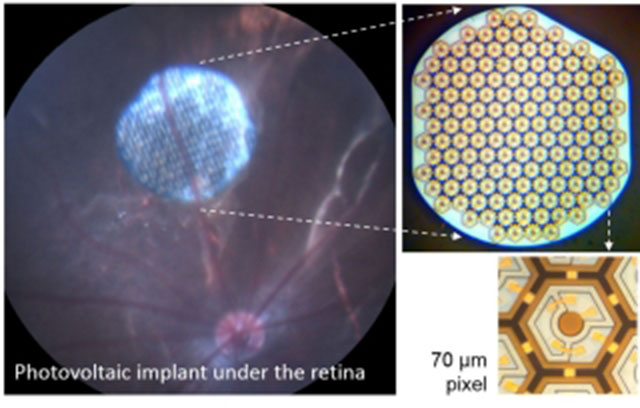 A team led by Stanford University researchers has found photovoltaic implants effective in providing functional vision to patients with blindness caused by retinal degenerative diseases such as retinitis pigmentosa or macular degeneration.

They have demonstrated through sub-retinal implants in rats with such visual impairment that electrical stimulation of surviving retinal neurons provides an alternative route for the delivery of visual information.

The said implants are able to convert light transmitted from special glasses into electrical current. The current stimulates the retina’s bipolar cells.

Retinal degeneration leads to loss of sight owing to the gradual death of photoreceptors.

“In rats with retinal degeneration, these photovoltaic arrays elicited retinal responses with a spatial resolution of 64 ± 11 μm, corresponding to half of the normal visual acuity in healthy rats,” the paper adds.

So far, the researchers have tested the device only in animals, but a clinical trial is planned next year in France.

“The performance we’re observing at the moment is very encouraging,” said Georges Goetz, a lead author of the paper and graduate student in electrical engineering at Stanford. “Based on our current results, we hope that human recipients of this implant will be able to recognize objects and move about.”