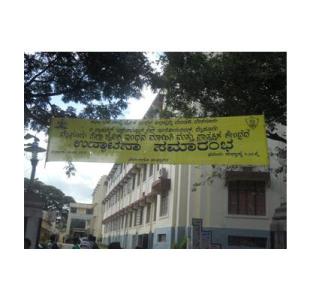 By Greentech Lead Team: The Karnataka government is
planning to set up Biofuel Information and Demonstration Centre in all
districts. As part of improving green fuels, Karnataka State Bio Fuel
Development Board, Bangalore will recommend the state government to remove VAT
on biodiesel.

Recently Ramakrishna delivered keynote address in an
interaction program on Blending Bio-Diesel for backup generators used in
buildings. The event was conducted by Karnataka State Biofuel Development Board
in association with Biofuel Information and Demonstration Centre, Mysore at NIE
CREST in Mysore.

“Soon ground vehicles at the Bangalore International
Airport vehicles will start using biodiesel. All the vehicles will have 10 per
cent of biodiesel. The official inauguration of the initiative will be held on
February 22. A recommendation will be sent to government to remove VAT on
biodiesel,” Ramakrishna added.

Already the Biofuel Information and Demonstration Centre is established in 16
different districts and by June this year all the districts will be having this
centre, pointed Ramakrishna during his keynote address in the interaction
program, according to media reports.