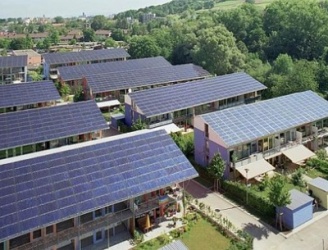 Government is implementing the Jawaharlal Nehru Solar
Mission (JNNSM), to promote harnessing/utilization of solar energy for power
generation and other applications in the country. The Mission envisages
installation of 20,000 MW capacities by the year 2022. Solar projects /systems
can be installed throughout the country.

A target of 10,000 MW has been fixed for solar power
projects during the 12th Plan. So far, 1045 MW of solar power projects have
been installed in the country, he added.

Currently the Government is also providing central
financial assistance (CFA) of 30 percent of the cost of installation of solar
photovoltaic systems such as solar lanterns, home lights, street lights and
stand-alone PV power plants subject to a maximum of Rs. 81/- per Wp under
Off-grid Solar Applications Scheme of the Jawaharlal Nehru National Solar
Mission (JNNSM) in General Category States.