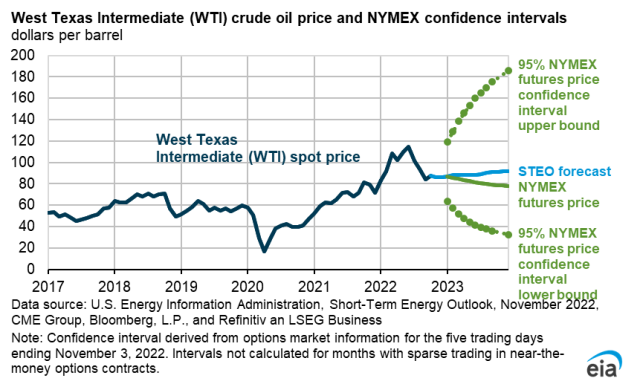 The U.S. Energy Information Administration (EIA) expects that low inventories of distillate fuels, which are primarily consumed as diesel fuel and heating oil, will lead to high prices through early 2023.

Diesel prices will remain higher than $5 per gallon the remainder of the year, and bills for homes that use heating oil will increase by 45 percent this winter season compared with last winter, according to EIA’s November Short-Term Energy Outlook (STEO).

U.S. inventories of distillate fuels finished October at their lowest levels in any October since 1951.

EIA sees additional uncertainty in the global marketplace for distillates and other fuels as the European Union plans to ban imports of petroleum products from Russia in early 2023.

EIA forecasts Russia will produce 9.3 million barrels per day of crude oil and petroleum products in 2023, down 14 percent from estimated 2022 production. Russia is a member of OPEC+, which announced crude oil production cuts in October, but EIA expects other factors to primarily drive Russia’s cuts in production.

Russia faces significant and expanding sanctions following its invasion of Ukraine, and we expect those sanctions will have far more impact on Russia’s energy production than the planned OPEC+ production cuts.

EIA estimates the Henry Hub natural gas price in the fourth quarter of 2022 and the first quarter of 2023 will be 17 percent lower than EIA previously forecast in October. EIA revised its forecast because U.S. natural gas storage levels have increased more than expected as winter approaches. This revision is unlikely to have much of an effect on retail natural gas prices this winter because there is typically a significant delay between changes in wholesale and retail prices for natural gas.