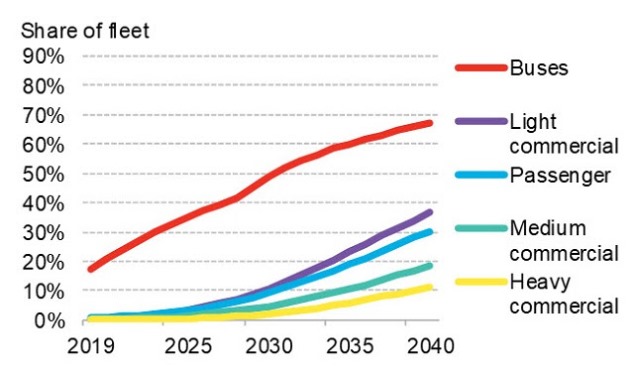 Electric vehicles are on track to dominate global sales of passenger cars and buses by 2040, according to the latest forecast from research firm BloombergNEF (BNEF).

Electric models will be taking 56 percent of light commercial vehicle sales in Europe, the U.S. and China within the next two decades, plus 31 percent of the medium commercial market.

“Electrification will take time because the global fleet changes over slowly but, once it gets rolling in the 2020s, it starts to spread to many other areas of road transport. We see a real possibility that global sales of conventional passenger cars have already passed their peak,” Colin McKerracher, head of advanced transport for BNEF, said. 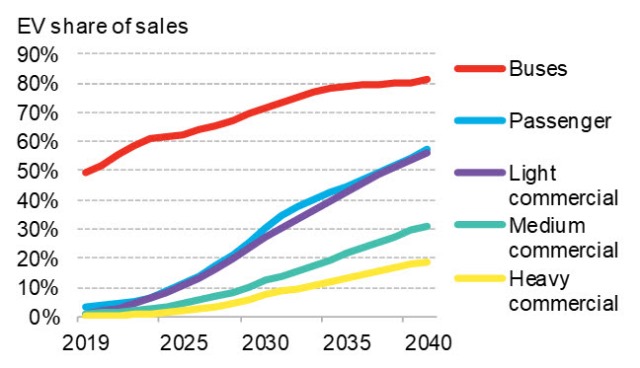 The shared mobility services such as ride-hailing and car-sharing will account for less than 5 percent of all passenger miles travelled globally at the moment and will rise to 19 percent by 2040. Autonomous driving will not have an impact on global transport and energy patterns until the 2030s.

The driver for the electrification trend over the next 20 years will be sharp reductions in EV battery costs. Since 2010, the average cost of lithium-ion batteries per kilowatt-hour fell by 85 percent on a mixture of manufacturing economies of scale and technology improvements.

China’s electric cars account for 48 percent of all passenger EVs sold in 2025 and 26 percent in 2040. Europe will become the number two EV market globally during the 2020s beating the U.S.