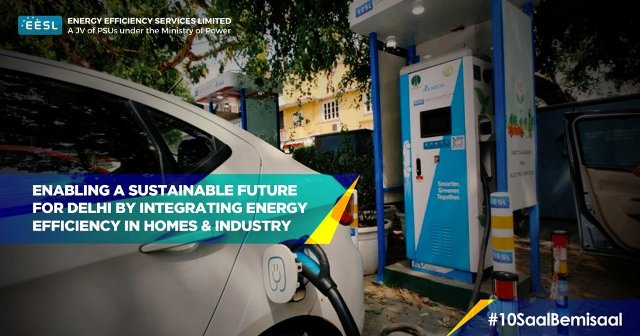 The beginning of the financial year was difficult as the country was dealing with the Coronavirus and its related lockdowns. EESL’s suppliers have also been facing shortages of components and labour during the lockdown that extended up till May-end, Rajat Sud said.

“With the supply resumed from the manufacturers and opening up of transport, EESL is striding towards installing at least 500 chargers by the end of the financial year. During the year, EESL has also completed an additional procurement of 1020 chargers.”

Eventually, the company plans to set up 10,000 charging stations over the next two to three years across the country.

Presently, the state-run EESL has partnered with various private and public companies such as Apollo Hospitals, BSNL, Maha-Metro, BHEL and HPCL, among others, to set up public charging infrastructure across India.

It has also partnered with urban local bodies in cities like Hyderabad, Noida, Ahmedabad, Jaipur and Chennai, and is in discussion with others to create such infrastructure.

One of the main capital requirements to set up charging infrastructure is the availability of ‘land’, which as of now is provided free of cost by most municipal bodies or firms for public chargers to EESL.

Currently, many automobile companies and other private players, including standalone charging infrastructure developers, are also installing these facilities.

EESL plans to ramp up installation of smart meters in the country.

A smart-meter digitally records and wirelessly shares stats like household electricity consumption and voltage levels to the distribution companies.

EESL has signed MoUs for smart meters with the states of Uttar Pradesh, Haryana, Bihar, NDMC-Delhi, Union territory of Andaman & Nicobar and Rajasthan. We have cumulatively installed over 15 lakh meters as of mid-December 2020.

“We have installed over 3 lakh Smart Meters during the Covid imposed lockdown and thereafter. During the lockdown, smart meters have reaffirmed their importance in being vital tools in ensuring smooth billing and collection operations.”

Smart meters have brought benefits to states and UTs like Uttar Pradesh, Haryana, Delhi and Bihar.

The average meter automated billing was above 95 percent in smart meter areas against a 71 percent provisional billing in areas with conventional meters.

This is expected to improve the billing efficiencies of Discoms and reduce their cost incurred on manual meter reading through a web-based monitoring system.