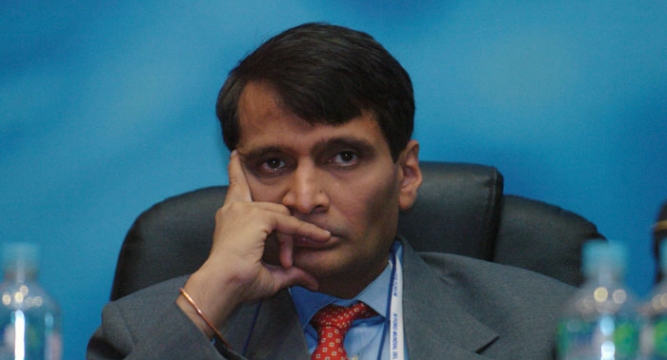 Corporates have bigger role to play towards mitigation and adaptation to the new reality of climate change, said Suresh Prabhu, Minister of Railways, Government of India, while addressing the gathering at the National Seminar for businesses on climate change organized by TERI-CBS ahead of COP 21.

“While the government provides air cover, corporates are the foot soldiers with their ideas and technologies towards mitigation and adaptation to the new reality of climate change,” Prabhu said.

Giving the example of how the US increased its energy efficiency after the discovery of shale gas, he added that innovation is the need of the hour and corporate India must follow suit in terms of technology innovation.

The seminar was intended to deliberate upon topics related to climate change that cut across industries as some of the most urgent concerns – energy, waste, water and renewable energy. It also preludes events hosted by TERI-CBS in Paris on the side lines of 2015 Paris Climate Conference.

The seminar also provided a platform for final consultations to check for course correction in its approach to harness the full strength of the corporate sector in dealing with issues related to climate change, while ensuring business sustainability.

Stressing on the all-inclusive approach to achieve our climate action targets, Dr Ajay Mathur, director, BEE said, “For each company each new rupee can be spent in various ways, but the challenge lies in ensuring that we get the best climate impact out of their decision on the expenditure.”

Francois-Joseph Schichan, Ambassador of France to India commented that corporates are ‘extremely forward-looking’ and providing them with ‘clear-cut directions on policies’ will help them adapt to the changing business climate. “Once they have a good prospect of a market, prices readjust in the favor of the stakeholders, such as in the case of solar energy.”

The discussions at the Seminar ensued on four main themes of business actions – Improving the Efficiency of Energy Use; Expanding the Use of Renewable Energy; Ensuring Water Availability in a Changing Climate; Efficient Waste Management.

Energy, water and waste are by far the most challenging areas for industries in terms of cost and impact on the environment. The scope to make adjustments in each area can be evidenced by many reports.

TERI estimates that under the Business As Usual (BAU) scenario the energy demand in industry, transport, and building is expected to increase by almost three times in the next 20 years. In terms of magnitude, by 2020 500mn people will live in urban areas and transport is the largest consumer of petroleum products.

During discussions on improving energy efficiency, Anil K Jain, advisor, NITI Aayog, opined that energy efficiency requires a complete ecosystem with infrastructure and regulatory practices, as in the transport sector; the same applies for the building segment.

Thus the government will now have to come forward to collaborate with the industry sector to affect the required changes.

As part of an opinion study by TERI polled companies believe that tax benefits and capital subsidy will significantly boost the production of RE.

Rana Kapoor, MD & CEO, YES BANK, urged the banks to influence and facilitate positive impact. “As we gear up for COP 21 in Paris, it is imperative to develop a pragmatic Corporate Vision on Climate Change through engagement from all stakeholders.”