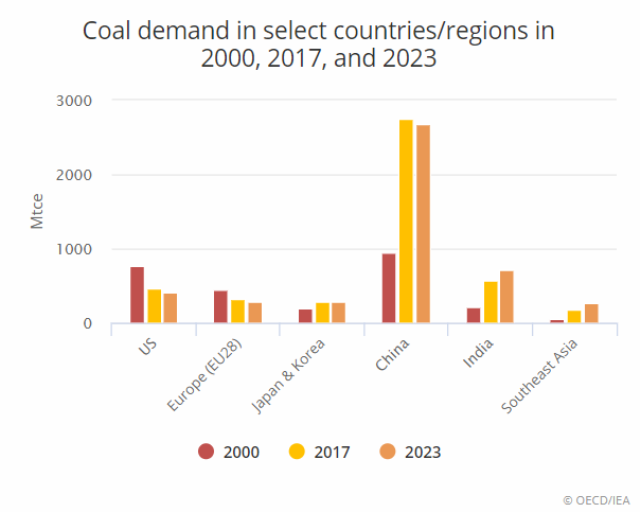 Coal demand is forecast to remain stable over the next five years though it will increase for the second year in a row in 2018, said International Energy Agency’s (IEA) latest coal market report.

Coal’s contribution to the global energy mix is forecast to decline slightly from 27 percent in 2017 to 25 percent by 2023.

Coal demand grows across much of Asia due to its affordability and availability. India sees the largest increase of any country, although the rate of growth, at 3.9 percent per year, is slowing, dampened by a large-scale expansion of renewables and the use of supercritical technology in new coal power plants. Significant increases in coal use are also expected in Indonesia, Vietnam, Philippines, Malaysia and Pakistan.

Coal in China accounts for 14 percent of global primary energy, the largest around in the world. Developments in the Chinese coal sector have the potential to affect coal, gas and electricity prices across the world, for instance through inter-fuel substitution or regional arbitrage.

In a growing number of countries, the phase out of coal-fired generation is a key policy goal.

“Tackling our long-term climate goals, addressing the urgent health impacts of air pollution and ensuring that more people have access to energy will require an approach that marries strong policies with innovative technologies,” said Keisuke Sadamori, director of Energy Markets and Security at the IEA.

what is illicit drugs definition. | The Senso Token has been developed on the Ethereum network.