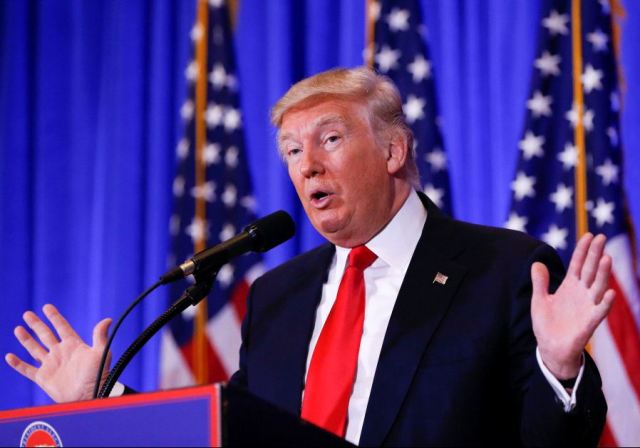 In the barrage of criticism against US President Donald Trump for his utterances on refugees and Muslims, what has been missed is that he has an “open mind” on environmental issues. He should now again see with an open heart the image of the “whole Earth” taken by the Apollo 17 mission commanded by Eugene Andrew Cernan (who died on January 16, four days before Trump assumed office). That may trigger action to make not only America, but the entire Earth, great again.

It would be worth retracing the Apollo 17 mission, the last US manned space mission during which Cernan became the last man, till now, to walk on the moon.

It was the winter of 1972; December 7 to be precise. Nearly five hours after launch and space travel of 45,000 km, the three American astronauts had adjusted themselves well in the space craft.

Outside was the universe of absolute darkness. In that vastness of infinity they saw a perky and intensely bright globe hanging from nowhere. It took some time for them to come to the terms with the reality and fathom that it was the very planet from where they were propelled five hours back. The Sun behind them, the Earth was strikingly dazzling and lively. With the help of a 70-millimetre Swedish camera specially modified for the Apollo mission, and an 80-millimetre German lens, the American astronauts captured that sharp image of the Earth.

Never before had a space craft, manned or unmanned, taken such an image of the whole Earth — that appeared like a blue marble, full of life.

That clear image, with polar ice cap in the south, the distinct Arabian peninsula at the centre, the island of Madagascar in the vicinity of the eastern African coastline and the western Indian coastline vaguely seen on the horizon, later became perhaps the most-reproduced and revolutionary image in human history.

Cernan would hardly have realised it in 1972 – that, more than anything else, the image would trigger a global movement for caring for our mother Earth.

Numerous obituaries that appeared after Cernan’s death recited his exceptionally heroic exploits that included his three rover excursions of about 30 km on the moon, 22 hours of moonwalks, commanding the longest lunar landing flight of 302 hours, and the longest, 73-hour sojourn on the lunar surface. None of these tributes highlighted the remarkable photograph of the whole Earth.

In reality, the image complemented the outcome of the first UN conference on Human Environment and Development in Stockholm in June 1972, six months before the Apollo 17 mission. Its declaration of 26 principles on environment and development and an action plan with 109 recommendations set in motion the enhanced understanding of environmental imperatives.

The image supplemented that very understanding by visualising the frailty of the Earth and the sense of urgency to act. The image was stored in the hearts of global citizens and became the root of modern environmentalism.

In his 2011 book, “Scales of the Earth”, El Hadi Jazairy, an MIT Research Scientist and Architect, wrote: “Time and time again, the environmental movement has circulated the NASA Earth photographs to cash in on their… delicate and bounded beauty.”

Indeed, that image became a symbol of the environmental crusade, by depicting Earth’s frailty, vulnerability, and isolation amid the vast expanse of space.

Ten years before the capture of that momentous image, a compelling book, “Silent Spring”, also transformed the way the Western world comprehends the Earth. It was authored by Rachel Carson, who described hauntingly how indiscriminate use of pesticides like DDT and hazardous chemicals were harming the Earth’s ecosystems.

The book targeted the chemical industry and regulatory officials for disinformation and casual attitudes that were threatening the life-supporting food chain. Al Gore, the former US Vice President and Nobel Laureate, wrote: “‘Silent Spring’ had a profound impact… Indeed, Rachel Carson was one of the reasons that I became so conscious of the environment.”

Many are convinced that “Silent Spring” tilted the balance of power in the world and diluted the hegemony of Western-style consumerism as the way to the progress. Discover magazine listed it as one of the 25 greatest science books. The passionate naturalist, Dr. Richard Attenborough, considered it the book that transformed the scientific world the most, after “Origin of Species” by Charles Darwin.

But again, the book stopped short of providing the vivid urge and vibrant impel to protect the Earth. It created controversies – including that Carson did not take into account the balance needed between the essential use of pesticide like DDT in poor countries to save the lives of millions from malaria, and the environmental damage it does.

That gap was, undoubtedly, filled by the 1972 image of the beautiful, elegant but dainty whole Earth. The world started to appreciate the idiocy of people fighting over borders, killings in the Middle East over some imaginary lines on the self-proclaimed territorial maps that cannot even seen from space. The only borders visible from space are the lines that separate oceans from land, forests from deserts and, if viewed carefully, deforested land from the pathetic forests that still exist.

After 45 years, the image is recalled in 2017 – with Cernan’s death and and when the trumpets are being blown to silence not only springs but also to blur the images that made us understand mother Earth. Triumphant shouts are heard for the repeal not only of treaties, but to reverse the treatise that the world had mustered to imagine.

Thus, Trump’s words on the environment have come not a day too soon. Will he take them forward?

By Rajendra Shende, chairman, TERRE Policy Centre. He is the former director of UNEP and an IIT Alumni. Views expressed are personal.