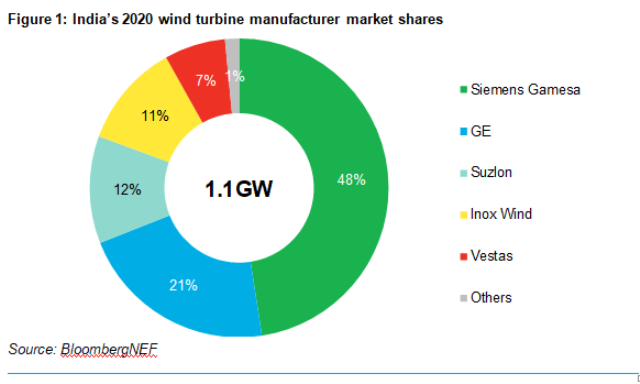 India has added 1.1GW of onshore wind projects in 2020 – the lowest new build in a decade.

Siemens Gamesa has retained its market leadership by accounting for nearly half of all capacity commissioned last year.

GE is in second position.

All major manufacturers were under stress because of challenging market conditions brought on by the Covid-19 pandemic.

Siemens Gamesa changed its local leadership and is restructuring its India business.

Suzlon is grappling with financial and operational challenges despite completing its third debt restructuring.

Other manufacturers had a difficult year as well.

BloombergNEF expects 3.2 gigawatts of new wind capacity will be added in 2021, three-times the capacity added in 2020, according to Shantanu Jaiswal, head of India research at BloombergNEF.

India government granted developers a five-month extension to commission renewable energy projects that suffered construction delays due to the Covid-19 pandemic. Commissioning of about 2 gigawatts of wind farms due to come online last year slipped into 2021.

Four major independent power producers (IPPs) such as Renew Power, Sembcorp Green Infra, Alfanar and Adani Green Energy, accounted for 70 percent of the total installed capacity in 2020. All of their projects were in the western state of Gujarat, and they were winners in the Solar Energy Corp. of India’s (SECI) tranche II and III wind auctions (2017-18).

Siemens Gamesa consolidated its top spot in the manufacturer ranking, and supplied nearly half of all projects commissioned last year. GE ranked second, accounting for over one-fifth of all wind installations.

Siemens Gamesa retained its position as the number one turbine supplier in India, with 532 megawatts commissioned last year.

While the onshore wind market in India contracted by 53 percent, the company’s installations fell by 26 percent from the previous year.

Siemens Gamesa grew its market share in 2020 by 18 percent. Siemens Gamesa managed to deliver on its pipeline of projects much better than other turbine makers. Siemens Gamesa restructured its business units in India to cut down on the number of business activities in the country and changed its local and global leadership.

In July 2020, Siemens Gamesa launched a 3MW+ platform tailored to the Indian market, pinning hopes of maintaining market leadership by offering a lower levelized cost of energy and custom technology.

GE installed the same amount of capacity as in 2019, at 244 megawatts, but a shrinking market boosted the U.S. firm to the second place. GE supplied wind turbines to Powerica for a 51.3-megawatt project won in the GUVNL II auction, and to Renew Power’s 400-megawattSECI III auction project, both located in Gujarat.

Inox Wind’s installations halved year-on-year to just 126MW in 2020. It commissioned 50MW that it won in the first federal SECI auction, as well as another50MW for Adani Green Energy from the SECI II auction.

India is a market that Vestas hasn’tquite cracked, despite being the leading turbine supplier worldwide for the past five years. The Denmark-based turbine maker ranks fifth, with just 74MW commissioned last year. Like Siemens Gamesa, in October 2020, Vestas launched a new 3MW+ wind turbine for the Indian market. No orders for this new turbine have been announced to date.

Senvion did not commission any capacity in 2020. Senvion filed for insolvency in April 2019, and has since offloaded its European service business and intellectual property, and its India operations. In August 2019, IPPs re-allocated 741MW (78 percent) of Senvion’s 950MW order book to Inox Wind (288MW) and Siemens Gamesa (453MW).