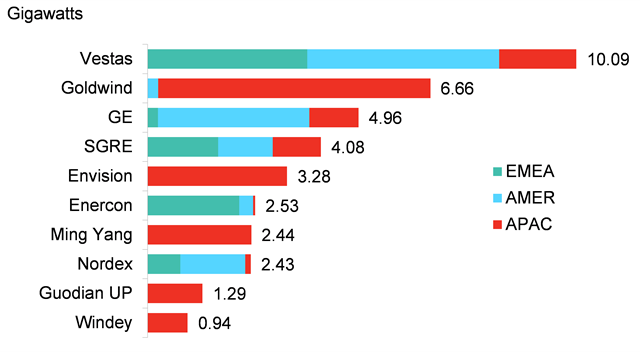 Four wind turbine manufacturers accounted for more than half, or 57 percent, of the machines deployed.

Developers commissioned over 45GW of onshore wind turbines globally in 2018 compared with 47GW in 2017, according to BloombergNEF.

Vestas, headquartered in Denmark, has increased its wind turbine share to 22 percent from 16 percent, with 10.1GW of its onshore turbines commissioned in 2018.

Goldwind, which has its headquarters in China, rose from third position in the global in wind turbine market to second place. Goldwind has captured a third of the 19.3GW market in China. Only 5 percent of Goldwind’s 6.7GW were commissioned outside China.

GE was in third position with 5GW – six out of every ten GE turbines were commissioned in the U.S. Both GE and Vestas commissioned just over 3GW in the U.S., with Vestas leading by 44MW in the neck-to-neck race for U.S. market leadership.

Siemens Gamesa, based in Spain, has dropped from second to fourth place, with 4.1GW wind turbines commissioned in 2018. This is 40 percent less than in 2017, although the tally does not include a number of very large wind farms that are only partially built and will not come online until 2019.

European onshore wind turbine makers Vestas and Nordex actually commissioned more capacity in the Americas than in Europe. Most of Enercon’s turbines are in Europe. Siemens Gamesa is the most diversified, with a near equal split across Europe, the Americas and Asia.

Onshore wind installations in 2018 were 11.7GW in the Americas, 8.5GW in Europe and 1GW in Africa and the Middle East, while Asia accounted for 24.2GW. China has commissioned some 1.7GW of the global 4.3GW.

David Hostert, head of wind research at BNEF, said: “There will be demand for around 60GW of onshore capacity in both 2019 and 2020 with increases in all regions.”