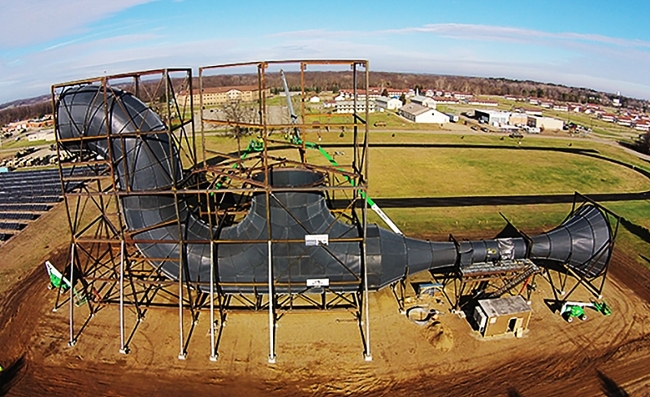 SheerWind announced that its INVELOX technology is gaining traction and the company is seeking investment to commercialize the technology.

As the company is nearing completion of a 200 kW INVELOX pilot project for Army National Guard-Michigan it has found another customer Tampa Electric in Florida.

Each with multiple INVELOX projects in development for 2016–17 totaling over 337MW.

The China Hub for example, is focused on community and utility scale INVELOX systems in 2016 with plans for 300MW the following year. The Netherlands Hub is developing roof-top units with plans for producing a 25MW utility-scale wind power plant within the next two years.

Traditional wind power systems have limitations due to massive equipment, inadequate winds and safety issues. Siting has been limited to farmland, desolate high wind regions (often in bird migration paths) and off shore.

INVELOX stands for INcreased VELocity. The technology turns traditional wind power systems upside down by first using a funnel to collect wind, channeling that wind to increase its speed, and then delivering it to multiple high-efficiency turbines safely covered on the ground.

This means wind energy can be produced from record low wind speeds of 2 meters per second in locations close to the end user—even on rooftops in urban areas—eliminating complex power and grid systems.

Watch the video of INVELOX

SheerWind’s INVELOX has the potential to provide wind energy in regions previously limited by low wind speeds, land space, or funds for the required infrastructure of traditional wind systems.

With a goal to add 8–10 more licensed distribution Hubs in 2016, SheerWind expects to play a significant part in the global push for climate friendly energy. “With 20–30 global inquiries a week, with the proper funding, we see this goal as readily attainable,” said Steve Faber, chief sales officer.