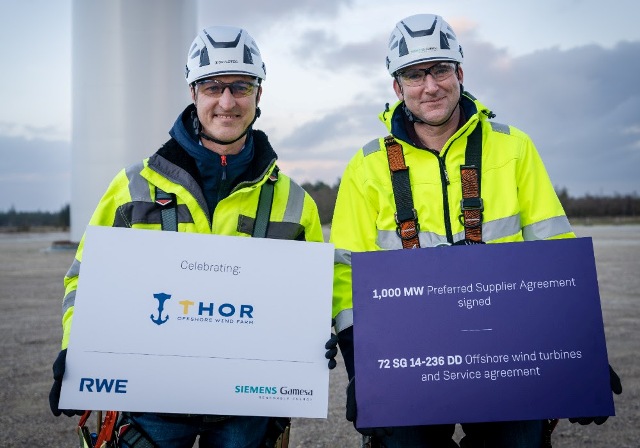 RWE has signed a Preferred Supplier Agreement with Siemens Gamesa for the deployment of the largest offshore wind power plant in Denmark.

Sven Utermohlen, CEO of RWE Offshore Wind, said: “In order to deploy this offshore project, we will rely on our track record of more than 20 years in offshore wind and on experienced suppliers, like Siemens Gamesa.”

RWE will build the Thor wind power plant in the Danish North Sea, approximately 22 kilometers from Thorsminde on the west coast of Jutland. Installation of the turbines at sea is expected to begin in 2026. The installation works are planned to be carried out from the Port of Esbjerg, Denmark.

For the operation and maintenance of Thor, RWE will set up a service base at the port of Thorsminde. RWE will be creating up to 60 permanent jobs — including technicians, engineers, nautical personnel as well as crew for the service vessels. The new service station will be fully operational from 2026 onward. RWE plans to support its project for at least 30 years from this port.