Event Company Primary has launched a £70 million wind farm in a remote part of Scotland for energy firm Eneco.

The Lochluichart wind farm in the Scottish hilltops is the largest onshore development commenced by Eneco.

Installation of a project in such a remote destination is a rare experience and the sense of community was very obvious. Understanding and adapting how the local community embraced things done was integral to the success of the event, said, Dan Stevens, MD, Primary, Leicestershire. 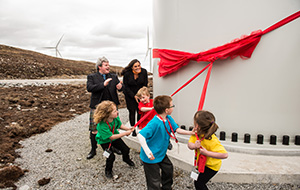 During the launch, a10 meter high banner was hung by children from the local Strathgarve Primary School from one of the turbines, displaying the name of the wind farm, The Spinny Turners.

The school played an essential part in the event and they were invited to perform a play on renewable energy and its positive impact on the environment, said, Stevens.

The event was made memorable with celebration such as a Scottish Highland tea and a pipe band playing with a big red bow wrapped around a turbine.

In addition, a branded educational visitor center was installed, helping the public interact with information on the local area and its history of energy generation.