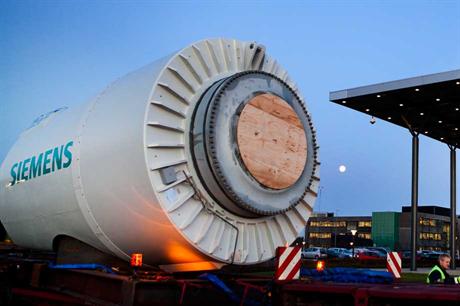 Siemens has announced the expansion of its o offshore direct drive platform, the SWT-8.0-154, with the addition of an 8-MW turbine.

The 8-MW turbine is based on the existing offshore direct drive platform, incorporating only smaller evolutions, the company said.

The first SWT-8.0-154 will be installed in early 2017, and will allow for up to 10% higher annual energy production (AEP) under offshore wind conditions as compared to the 7-MW model.

Siemens  claims that the offshore direct drive platform enables a significant reduction in the Levelized Cost of Energy (LCoE) at low risk. Type certification for the 8-MW turbine is expected to be obtained at the beginning of 2018.

Siemens also announced that its high performance wind turbine for medium to low onshore wind sites has reached the next milestone: The SWT-3.3-130 has successfully obtained type certification from DNV GL.

“We are relentlessly working on lowering the levelized cost of energy, and the offshore direct drive platform enables us to do this with the lowest possible risk,” says Michael Hannibal, CEO for Offshore at Siemens’ Wind Power and Renewables Division.

“With the same proven reliability as our successful 6 and 7-MW models, the SWT-8.0-154 will be the new benchmark for gearless offshore wind technology on the market,” Hannibal added.

In the new 8 MW upgrade, Siemens has used a new magnet technology with an even higher grade than that introduced in the SWT-7.0-154. This enables a rated power increase of more than 14% from 7.0 to 8.0 MW.

Similar to the previous upgrade from 6.0 MW to 7.0 MW, the 8-MW turbine will benefit from the established supply chain and proven components of offshore direct drive technology. These components include the B75 blade and the medium-voltage transformer of the SWT-8.0-154.

Since the higher rating will be achieved with only a few component upgrades, customers will again benefit from fast time-to-market and low risk as the key value drivers, the company said.