New Energy, developer of see-through SolarWindow coatings that can generate electricity on glass and flexible plastics announced the ongoing development of its SolarWindow devices and modules.

The company has achieved significant research and development milestones and remains focused on commercializing this technology for generating electricity on glass windows. The color and transparency of the electricity-generating glass modules, and power production estimates are encouraging, explained, John A. Conklin, president, CEO, New Energy.

New Energy engineers estimate that SolarWindow modules installed on a 50-story building could produce at least ten times the electrical energy of PV systems and perhaps may exceed power performance by as much as 50-fold. 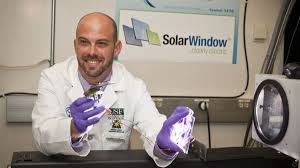 Again in another analysis, engineers’ estimate that SolarWindow installed on a 50-story building could generate enough electricity to power at least 100 homes while eliminating the equivalent carbon emissions produced by vehicles driving 2,750,000 miles per year.

SolarWindow modules modeling estimates for the city of Miami, Florida shows that they could generate over 1.3 million kWh of energy.

The Company visualizes SolarWindow technology installations on tinted glass surfaces of commercial buildings, skyscrapers, and tall towers, which can be applied on all four sides of towers, generating electricity retaining natural light conditions and shaded areas.

Currently, SolarWindow is under development for commercial deployment in the estimated 80 million detached homes in America and more than five million commercial buildings.

Further, the technology is the focus of 42 patent filings, and researchers aim to advance SolarWindow towards full-scale commercial manufacturability in near future.