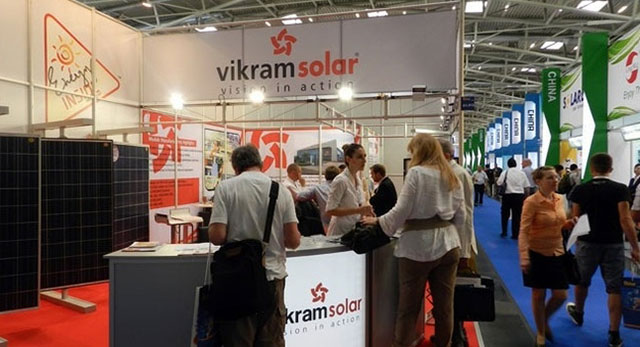 The Indian solar module maker has signed the MoUs with Germany-based Fraunhofer Institute for Solar Energy Systems and Centrotherm Photovoltaics besides Switzerland-based Meyer Burger Technology at the Hannover Trade Fair (at Hannover Messe).

The MoUs will help Vikram Solar to upgrade and equip itself for solar cell manufacturing and to establish a solar academy in India.

“Vikram Solar aims to reinforce its position as a technologically advanced PV module manufacturer through the collaboration. We believe this will add tremendous value for our global customers, resulting in product quality at competitive costs,” Gyanesh Chaudhary, the managing director and CEO of Vikram Solar, said.

“Fraunhofer ISE is happy to support Vikram Solar to build a production line for solar cells with the latest technology and therefore contribute to the ‘Make in India’ initiative of the Indian Government,” Gerhard Stryi-Hipp, the head of energy policy of Fraunhofer ISE, said.

Switzerland-based Meyer Burger and Vikram Solar have already had associations in the past; the latter uses production equipment made by Meyer Burger.

The new MoU will support process improvements in solar cell and module manufacturing besides research and development for materials, processes, and device technologies.

The MoU with Centrotherm will facilitate the application of Centrotherm’s production equipment and manufacturing expertise to improve cell efficiency and productivity of Vikram Solar.