Home Solar Solar funding drops 25% to $4.5 billion in first half 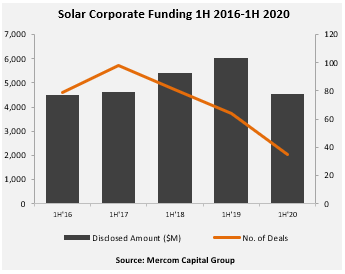 Total corporate funding in the solar sector in the first half of 2020 decreased 25 percent to $4.5 billion compared to $6 billion in 1H 2019, a research report from Mercom Capital Group indicated.

In 1H 2020, global VC funding (venture capital, private equity, and corporate venture capital) in the solar sector was 74 percent lower with $210 million compared to $799 million raised in the first half of 2019.

The top transaction in the first half of 2020 was the divestment of Brookfield Renewable Partners’ Thailand-based solar energy business, which was sold to PTT Public Company’s power and energy arm, Global Power Synergy Public Company, for $100 million.