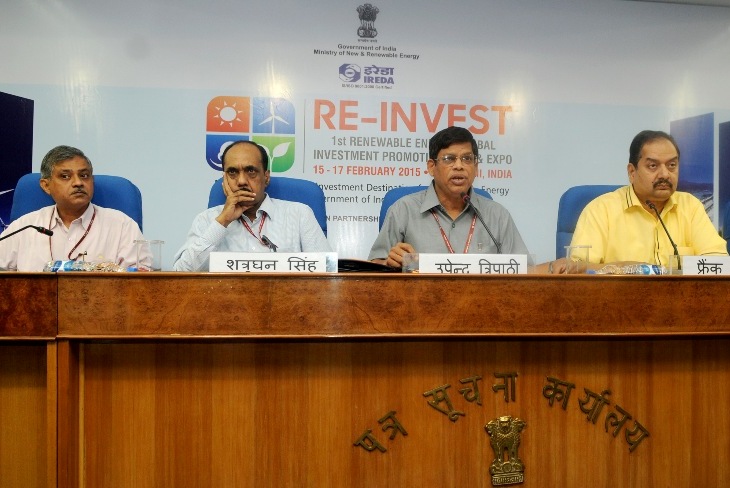 The RE-Invest program inaugurated by Prime Minister Narendra Modi has so far seen 293 companies committing to generate 266 GW of renewable energy in the next five years.
In addition, country’s largest lender State Bank of India (SBI) is ready to finance Rs 75,000 crore for generating 15,000 MW of green energy.
India’s public utility NTPC has plans to generate 10,000 MW of clean power whereas Suzlon and Gamesa will invest in equipment production to help generate 11,000 MW and 7,500 MW of power respectively.
Furthermore, Welspun Energy has kept a target to generate 11,000 MW, ReNew Power 11,500 MW capacity, Reliance Power 6,000 MW, Hindustan Power projects 10,000 MW and Sun Edison 15,000 MW.
On the other hand, Piyush Goyal, Minister for Renewable Energy has announced that government aims to achieve 100,000 MW of solar power capacity by 2022.
Out of this total target, almost 40 percent will be contributed by solar rooftop panels, which will be largely set up on government owned buildings like railway stations and defense establishments.
20,000 MW from the remaining target will be distributed among unemployed graduates for solar entrepreneurship, who will be given Rs 65 lakh as equity for the same.
The defense establishments have opted for a 1,000 MW of solar, out of which 300 MW is already approved by the government.
This new renewable energy goal is expected to create one million jobs in India, a new analysis released by the Council on Energy, Environment and Water (CEEW) and the Natural Resources Defense Council (NRDC) says.
Moreover, achieving India’s proposed target of 60 GW of wind energy by 2022 will also generate an additional 180,000 jobs.
According to the analysis, the one million jobs will come from project planning, construction, installation and operations required to meet this solar goal.