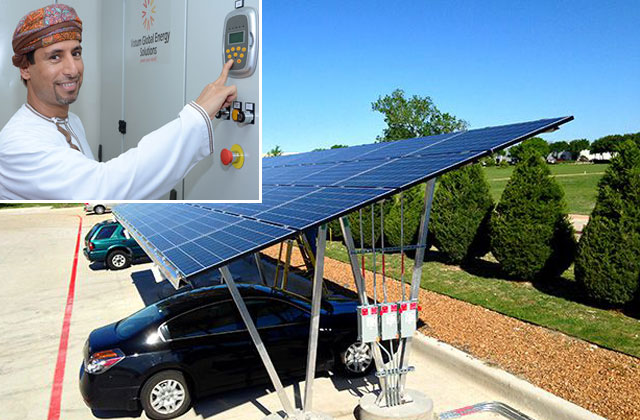 Oman commissioned a pilot solar project, claimed to be the largest in the sultanate, at the Renaissance Permanent Accommodation for Contractors (PAC) in Fahud on Monday.

The concept solar plant helps save design and structural costs besides generating about 2.2 million kilowatt hours of renewable energy every year.

Its current production meets the daytime electricity needs of PAC, which translates into saving of roughly 25 barrels of oil a day.

In other terms, the project cuts carbon emissions by 1,500 metric tons a year — the equivalent to planting 580 acres of trees or cutting 4.5 million kilometres of travel in gas-based vehicles.

Renaissance officials say that not only PACs but also small and medium enterprises (SMEs) can adopt renewable energy sources. The managing director of Renaissance Ananda Fernando said the company was willing to implement similar projects for other ventures, too, if they were inclined to switch to solar power.

The project is expected to eventually become the Sultanate’s primary source of power that would be a cheaper alternative to oil, according to Salim bin Nasser Al Aufi, the undersecretary of Oman’s ministry of oil and gas.

“These projects are more strategic than commercial. At some point oil prices are going to surpass costs of solar panels. Then it won’t cost us time to shift to renewable energy as the primary source of power,” Al Aufi said.

“Solar power won’t phase out the oil and gas industry but will be an addition to them. It is complimenting what we do and we need to embrace it,” he added.

According to Al Aufi, Oman’s oil and gas consumption, particularly for power generation, was going up at the rate of 10 percent a year.

He believes the country needs to concentrate on renewable energy now although it is currently not cost-effective, so that in future cost-effective alternatives can be developed.

Oman has immense potential for the growth of solar power projects. It boasts one of the highest solar energy densities in the world and clear skies to match, which are ideal for solar power generation.

The ruler of Oman has also laid out the vision to meet 10 percent of the country’s energy needs using renewable sources by 2020.