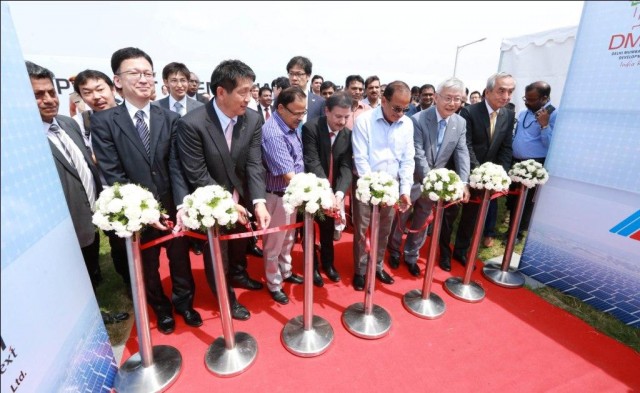 The project uses Japanese technology to integrate solar power with diesel generators to provide reliable green energy supply for industrial use, along with a 5MW model solar power plant.

The Neemrana Solar Power Project, built by the Delhi Mumbai Industrial Corridor Development Corporation (DMICDC) in partnership with the Government of Japan, was dedicated to the nation by Mr. Ramesh Abhishek, Secretary, Department of Industrial Promotion and Policy (DIPP), in the presence of H.E. Mr. Kenji Hiramatsu, the Ambassador of Japan to India, and senior government officials and business heads from both the countries.

The project has been implemented in partnership with the New Energy and Industrial Technology Development Organization (NEDO), Government of Japan, with the solar panels and other equipment like inverters, Supervisory Control And Data Acquisition (SCADA) System etc. procured from Japanese companies including Hitachi, Kyocera, Itochu, Sharp, Solar Frontier and Kaneka.

The power project, managed by the DMICDC Neemrana Solar Power Company Limited (DNSPCL), a wholly owned subsidiary of DMICDC, is spread over an area of 36 acres of land allocated by the Rajasthan State Industrial Development & Investment Corporation (RIICO) in the Japanese Zone, Neemrana.

The DNSCPL has a power purchase agreement with NTPC Vidyut Vyapar Nigam Limited (NVVNL) for the 5MW Solar Power Plant for a period of 25 years.

Japanese automotive parts manufacturer Mikuni India is the first industrial consumer of the 1MW micro grid project and has been receiving power from the unit since July this year under a 10-year Power Purchase Agreement.

“Projects such as these are part of the larger goal to minimize India’s dependence on fossil fuels as we move towards a manufacturing economy,” said Ramesh Abhishek in his inaugural address at the commissioning. “We deeply appreciate the Japanese Government’s assistance in setting up the plant and will look to execute more such projects along the industrial corridors and manufacturing zones that we are developing.”

In his keynote address Kenji Hiramatsu reaffirmed the Japanese Government’s desire to partner with India in large scale infrastructure projects.

“This project is a symbol of strategic partnership between the two countries. The DMIC itself is a unique initiative under this partnership. I am delighted to witness the commissioning of this project using the latest technology from Japan, contributing to India in the field of energy, here in Neemrana”.

Kazuo Furukawa, chairman, NEDO, who delivered a special address, said, “NEDO, in partnership with Government of India, has always promoted the use of the latest, cutting edge technologies from Japan. This project will help in reducing overall carbon footprint in the region and it has the potential of scaling up at every industry level and will help in meeting the energy requirement as the Govt. of India expands its manufacturing base under the Make in India policy.”

DMICDC, which has set up the 6MW project in Neemrana to give a fillip to the large-scale use of solar power and smart micro grid technology, hopes to promote indigenous development of solar panels and other equipment and technology.

Neemrana falls in Khushkhera-Bhiwadi-Neemrana Investment Region, one of the eight industrial nodes being developed in Phase I of the Delhi Mumbai Industrial Corridor.

Alkesh Kumar Sharma, CEO and MD of DMICDC, said, “The wider adoption of green energy systems for industrial use is limited by concerns with regard to reliability and uninterrupted supply. With the integrated 1MW micro grid, it is amply demonstrated that such systems are viable and will become even more efficient over time.”