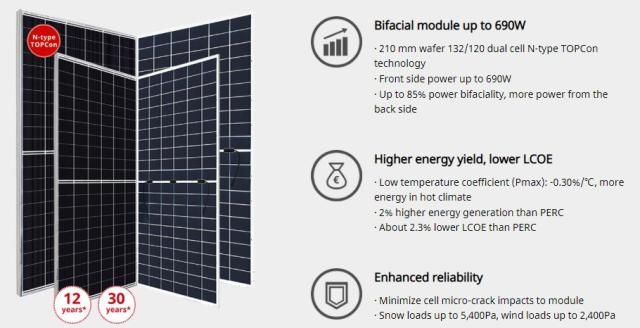 Canadian Solar’s TOPCon modules have a power output of up to 690W, and cell conversion efficiency of around 25.0 percent, which is 1.5 percent higher than the cell efficiency of the mainstream products in the market.

Canadian Solar’s TOPCon modules will increase energy yield of PV systems and deliver one of the most competitive BOS (balance of system) cost savings and LCOEs (levelized cost of electricity) for solar power plants, compared to PERC modules.

Shawn Qu, Chairman and CEO of Canadian Solar, said: “The TOPCon modules will become one of our featured products with higher energy yield, lower LCOE and longer performance warranty, compared to the mainstream products in the market. The TOPCon modules will solidify our competitiveness in terms of technology leadership and pricing power.”