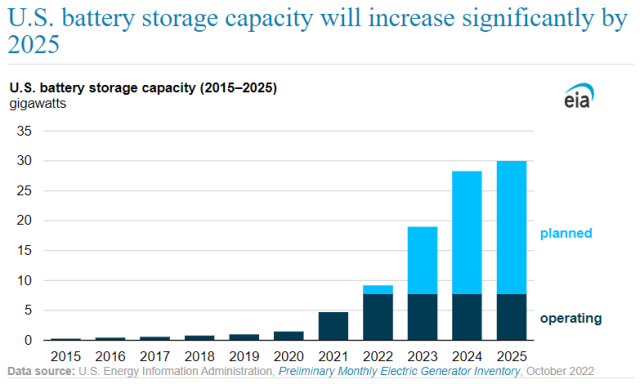 Power utilities in the United States could triple their battery storage capacity in the three years, as new projects grow bigger while wind and solar capacity expand, the U.S. Energy Information Administration (EIA) said in its report.

Developers and power plant owners reported plans to increase utility-scale battery storage from 7.8 gigawatts (GW) in October this year to 30 GW by the end of 2025, according to the EIA’s Preliminary Monthly Electric Generator Inventory.

Much like solar power, growth in battery storage would change the U.S. electric generating portfolio as it will make intermittent sources of energy like wind and solar more stable by storing extra energy for use later, the EIA said.

More than three-quarters of the planned 20.8 GW additions are in Texas and California, which are home to more wind and solar capacity, respectively, than any other state.

Texas, which accounts for 7.9 GW of all planned battery storage additions until 2025, is expected to house 42.5 GW of wind capacity and 30.9 GW of solar capacity by that year.

California, which currently hosts 16.8 GW of solar capacity with planned additions of 7.7 GW in the next three years, will install 7.6 GW of battery storage in that period.

“As more battery capacity becomes available to the U.S. grid, battery storage projects are becoming increasingly larger in capacity,” the EIA said. More than 23 large-scale battery projects, between 250 MW and 650 MW, were slated to be deployed by 2025.