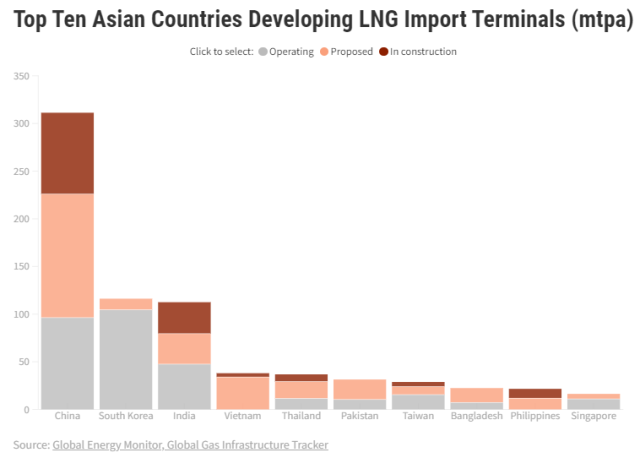 This $119 billion investment could lock Asian economies into reliance on an expensive energy source and challenge global efforts to address the climate crisis.

According to the International Energy Agency (IEA), LNG imports were down 7 percent year-on-year between January and August, with spot cargoes down 28 percent over the same period. Price sensitive South Asian LNG buyers, particularly Pakistan and Bangladesh, are finding it difficult to pay high spot prices as the region moves into the winter. Major forecasting agencies have found that these conditions could depress future gas demand in emerging Asian economies.

China is planning the largest LNG buildout in the region. Its 214.9 mtpa of LNG import projects is estimated to cost $72.1 billion and amounts to almost half of all such capacity in development in Asia. Other leading countries developing LNG import terminals include India, Vietnam, Thailand, the Philippines, and Pakistan.

Asia has enough LNG import projects in development to boost global LNG import capacity by nearly 50 percent, and a third of these projects (145 mtpa) are already in construction.

Amid a challenging environment for new LNG import projects, just two 1-mtpa terminals in Asia have been commissioned since the beginning of 2022. Only 17.1 mtpa of new import capacity came online the year before that.

Future LNG supplies for Asia could come from exporters with the most new projects in development, such as the United States (322.5 mtpa), Russia (133 mtpa), and Canada (75.6 mtpa), although globally progress advancing such projects has been mixed.