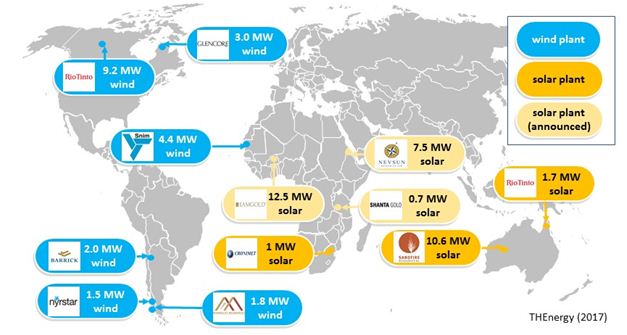 Renewables are becoming an attractive solution for improving mining companies’ energy cost positions, says THEnergy Analysis, a Germany based consultancy specializing in microgrids, based on the recent developments in the industry.

Iamgold has announced it is adding a new 12.5 MW solar PV plant to its Essakane gold mine in Burkina Faso. The Canadian company has signed a power purchase agreement (PPA) with the French independent power producer (IPP) EREN for an initial period of 15 years. The multinational Wärtsilä headquartered in Finland will integrate and build the solar plant.

Another Canadian miner, Nevsun, followed by announcing a 7.5 MW solar plant to reduce diesel consumption at its Bisha mine in Eritrea. Under a ten year PPA, Aggreko will provide a total of 29.5 MW of solar-diesel hybrid power to the gold and copper mine.

Africa and Australia are turning into “solar-for-mining hotspots”, while Canada and South America lead the development of wind-diesel hybrids.

“This upturn has become apparent during the last few months”, according to Dr. Thomas Hillig, managing director of THEnergy. “We have been observing the market closely for the last 3 years. In the past 12 months, more and more mining companies have become interested in renewables.”

Several factors contribute to this development. In the beginning, mining companies had serious doubts regarding the reliability of renewables. Various prototypes, some of them subsidized, some with and some without battery storage, have proven the concept of combining solar or wind with fossil power sources.

In addition, brands known from conventional energy such as Caterpillar, Cummins, Aggreko, Wärtsilä, and ABB – that are active in hybrid markets – increase the trust in renewable energy off-grid solutions. Declining prices for renewables and energy storage have improved the business case for mines considerably.

Mines also feel more comfortable entering long-term commitments of 10 years or more. Mining companies see that the advantages of renewables go beyond pure cost savings in that they could generate positive publicity and also position them as progressive toward investors. Internally, renewables have turned out to be an attractive platform for ambitious employees to qualify for further management challenges.

Maybe even more important are the lessons learned on the part of the renewable companies, the agency said. They started to speak the language of miners and to understand the necessity of tailor-made solutions for individual mines. Renewable energy players have realized that many mines are not willing to invest their own capital or to commit to long-term PPAs that correspond to the physical lifetime of solar or wind assets.

The formation of financing solutions for relatively short-term PPAs was crucial. This also calls for the emergence of a plan B in case that PPAs are terminated earlier or are not prolonged as expected. Solar companies in particular dedicate resources for making solar plants more flexible through semi-mobility concepts that facilitate their dismantling and redeployment at different locations. Finally, renewable energy players have started to apply modern sales and marketing tools to spread the message to mining decision makers.

“The newly announced projects will speed-up the uptake. If everything turns out well, mining companies could sign another 5-8 PPAs for renewable energy supply before the end of 2017,“ says Hillig.