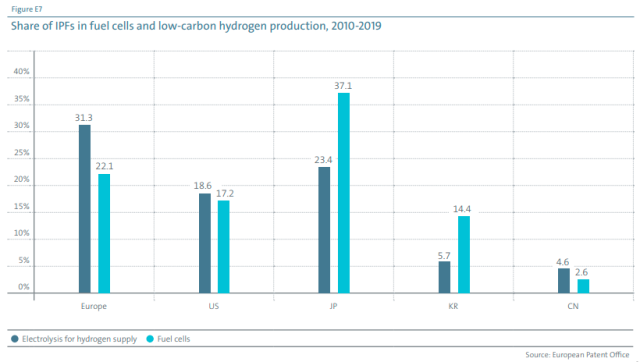 The European Patent Office (EPO) and the International Energy Agency (IEA) have released the latest data on patent focusing on the hydrogen technology development.

Leader in global patenting in hydrogen is Japan has 24 percent share of all international patent families (IPFs) filed from 2011 to 2020.

The United States, with 20 percent of all hydrogen-related patents, is the only major innovation centre to see international hydrogen patent applications decline in the past decade.

The leading countries in Europe are Germany (11 percent of the global total), France (6 percent), and the Netherlands (3 percent) of patenting in hydrogen technology, the report said.

Patenting activity in hydrogen technologies remained modest in South Korea and China but is on the rise. Other countries generating significant volumes of hydrogen patents include the United Kingdom, Switzerland and Canada.

Technologies motivated by climate concerns accounted for nearly 80 percent of all patents related to hydrogen production in 2020, with growth driven chiefly by a sharp increase of innovation in electrolysis. The most innovative regions are now competing to host the first industrial roll-out phase, with the data suggesting that Europe is gaining an edge as a location for investment in new electrolyser manufacturing capacity.

“If hydrogen is to play a major role in reducing CO2 emissions, innovation is urgently needed across a range of technologies,” said EPO President Antonio Campinos.

Among hydrogen’s many potential end-use applications, the automotive sector has long been the focus for innovation, and patenting in this sector continues to grow, led mainly by Japan.

The study finds that more than half of the $10 billion of venture capital investment into hydrogen firms in 2011-2020 went to start-ups with patents, despite them making up less than a third of the start-ups in the report’s data set.

Equinor and RWE to make investment in green hydrogen