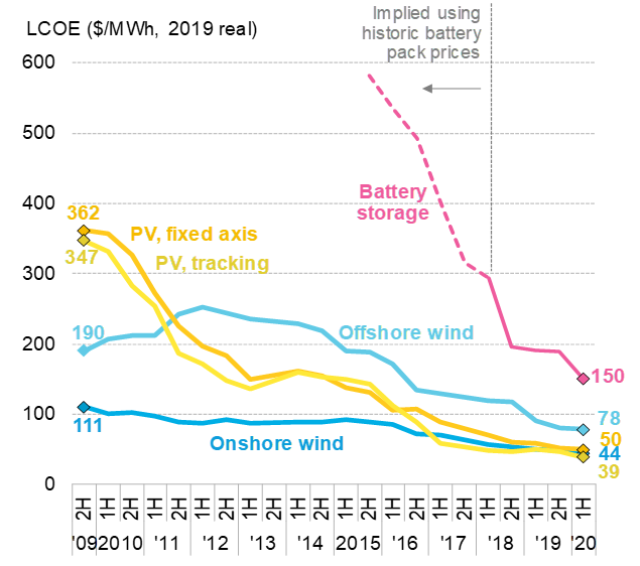 Cost for onshore wind, solar and battery storage have dipped significantly, according to  BNEF.

The benchmark levelized cost of electricity, or LCOE, for onshore wind has dropped 9 percent since the second half of 2019 – to $44 per MWh.

The benchmark LCOE for utility-scale PV has decreased 4 percent since the second half of 2019 – to $50 per MWh.

The benchmark LCOE for battery storage has fallen to $150/MWh, about half of what it was two years ago, research report from BloombergNEF (BNEF) said.

Onshore wind has seen its most significant drop in cost since 2015 mainly due to a scale-up in turbine size, now averaging 4.1 megawatts, and priced at about $0.7 million per megawatt for recently financed projects.

Top wind projects in the U.S., India and Spain follow at $26, $29 and $29 per megawatt-hour respectively, excluding subsidies such as tax-credits.

In China, the largest PV market, solar benchmark is at $38/MWh, down 9 percent from the second half of 2019. New-build solar in China is almost on par with the running cost of coal-fired power plants, at an average of $35/MWh.

BNEF estimates that some of the cheapest PV projects financed in the last six months will be able to achieve an LCOE of $23-29 per megawatt-hour. Those projects can be found in Australia, China, Chile, and the U.A.E.

The dramatic improvements in the cost-competitiveness of solar and wind is mainly due to photovoltaic and wind technology getting better at extracting renewable resources. Since 2016, auctions are forcing developers to realize cost savings by scaling up project size and portfolios.

Larger scale enables them to slash balance-of-plant, operations and maintenance expenses – and have a stronger negotiating position when ordering equipment,” Tifenn Brandily, lead author of the report at BNEF, said.

BNEF said the average onshore wind farm has doubled its capacity from 32 megawatts in 2016 to about 73 megawatts. Solar farms are a third more powerful today, at 27 megawatts on average, compared to 2016.

Today the best solar projects in Chile, the Middle-East and China, or wind projects in Brazil, the U.S. and India, can achieve less than $30 per megawatt-hour.

China has the cheapest storage levelized costs globally, at $115 per megawatt-hour mainly due to the proximity of developers to the equipment supply chain and widespread use of cheaper LFP (lithium iron phosphate) chemistries.

In comparison, the levelized cost of open-cycle gas turbines per megawatt-hour sits today between $99 in the U.S. and $235 in Japan, with China at $145.