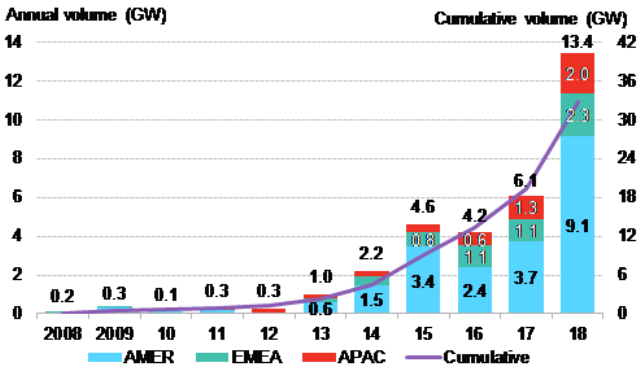 121 corporations have signed 13.4GW of clean energy contracts through power purchase agreements, or PPAs, in 21 countries in 2018 as against 6.1GW in 2017, according to a BloombergNEF (BNEF) report.

Jonas Rooze, head of corporate sustainability for BNEF, said: “Purchase of 32GW of clean power since 2008 is comparable to the generation capacity of the Netherlands, with 86 percent of this activity coming since 2015 and more than 40 percent in 2018 alone.”

US-based business houses were responsible for more than 60 percent of the global activity in 2018. US companies have signed PPAs to purchase 8.5GW of clean energy, nearly triple the amount signed in 2017.

ExxonMobil became the first oil major to sign a clean energy PPA for its own operations, purchasing 575MW of solar and wind in Texas. Mexico and Brazil also saw growth in corporate procurement, rounding out the 9.1GW of clean energy purchased by companies in the Americas region in 2018.

The emergence of smaller, first-time corporate clean energy buyers was one of the trends in clean energy market in US. Some 34 new companies signed their first clean energy PPAs, making up 31 percent of total activity in the US in 2018.

Corporations in the Europe, Middle East and Africa (EMEA) region also signed clean energy deals for 2.3GW and doubling the 1.1GW signed in 2017.

The Nordics were the hot spot for clean energy activity, with companies attracted to strong wind resources and credit support from government bodies.

Aluminium producers Norsk Hydro and Alcoa purchased the most clean energy in Europe in 2018. Technology companies such as Facebook, Amazon and Alphabet subsidiary Google were also active in Europe.

Offsite corporate PPA mechanisms are now available in nine provinces in China, and the imminent passing of a renewable portfolio standard will give over 30,000 large commercial and industrial companies renewable electricity targets.

BNEF estimates companies will need to purchase an additional 190TWh of clean electricity in 2030 to meet their RE100 targets. It would catalyse an estimated 102GW of new solar and wind build globally.