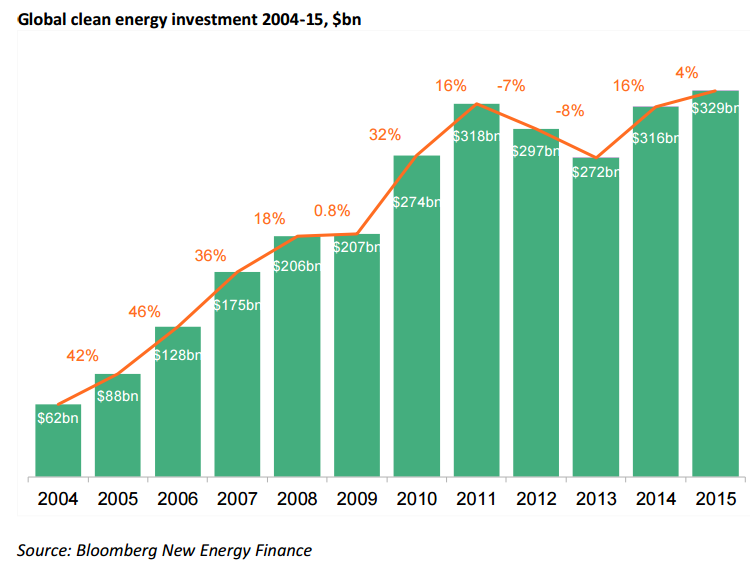 Four factors did not impact the renewable energy industry. These were: declines in the cost of solar photovoltaics, meaning that more capacity could be installed for the same price; the strength of the US currency; the weakness of the European economy; and the plunge in fossil fuel commodity prices.

The investment in asset finance of utility-scale projects such as wind farms, solar parks, biomass and waste-to-energy plants and small hydro-electric schemes rose 6 percent to $199 billion in 2015.

UK’s 580MW Race Bank and 336MW Galloper, with costs of $2.9 billion and $2.3 billion respectively, Germany’s 402MW Veja Mate, at $2.1 billion, and China’s Longyuan Haian Jiangjiasha and Datang & Jiangsu Binhai, each of 300MW and $850 million were some of the large projects.

The biggest financing in onshore wind was of the 1.6GW Nafin Mexico portfolio, for an estimated $2.2 billion. For solar PV, it was the Silver State South project, at 294MW and about $744 million, and for solar thermal or CSP, it was the NOORo portfolio in Morocco, at 350MW and around $1.8 billion.

The largest biomass project funded was the 330MW Klabin Ortiguera plant in Brazil, at about $921 million, and the largest geothermal one was Guris Efeler in Turkey, at 170MW and an estimated $717 million.

Clean energy investment on rooftop and other small-scale solar projects rose 12 percent to $67.4 billion in 2015. Japan was the largest market, followed by the US and China.

The capacity addition in wind and solar PV was around 30 percent in 2015. The wind capacity reached at around 64GW. The capacity of solar was about 57GW. This combined total of 121GW will have made up around half of the net capacity added in all generation technologies (fossil fuel, nuclear and renewable) globally in 2015.

Venture capital and private equity investors pumped $5.6 billion into specialist clean energy firms in 2015, up 27 percent on the 2014 total but still far below the $12.2 billion peak of 2008.

The biggest VC/PE deal of last year was $500 million for Chinese electric vehicle company NextEV. There was $20 billion of asset finance in clean energy technologies such as smart grid and utility-scale battery storage, representing an 11 percent rise on 2014, the latest in an unbroken series of annual increases over the past nine years.

Government and corporate research and development spending rose 1 percent to $28.3 billion in 2015.

China was the largest investor in clean energy in 2015, increasing its dominance with a 17 percent increase to $110.5 billion.

US was in the second position with an investment of $56 billion, up 8 percent.

Europe made an investment of $58.5 billion, down 18 percent.

Japan saw investment rise 3 percent to $43.6 billion, on the back of a continuing PV boom.

Investment in renewable energy in Africa and the Middle East was $13.4 billion, up 54 percent.