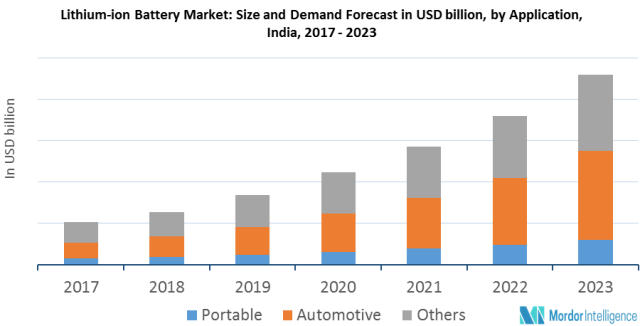 BHEL and Libcoin are planning to form a joint venture to initially build 1GWh lithium-ion battery plant in India.

The capacity of India’s first Lithium-ion battery factory will be scaled up to 30GWh as part of India government’s initiatives in energy security and clean energy. Core-cost components will be manufactured in India. It will create integrated manufacturing ecosystem resulting in self-reliance and lower cost.

BHEL will be sending a team of senior officers for study of the facilities, R&D infrastructure and other techno-commercial issues. This project will bring energy independence by replacing oil imports with abundant renewable.

Suzuki, Toshiba, and Denso April 2017 reached an agreement to establish a joint venture company for the production of automotive lithium-ion battery packs in India.

India Lithium Ion cell and battery market is expected to reach around 5 GWh in sales volume by 2023, according to Ken Research.

The India lithium-ion battery market is expected to grow at CAGR of 29.26 percent during the forecast period 2018-2023.

Libcoin Chairman Rajan Duggal said: “Our plan is to be the largest Lithium-ion battery manufacturer in India.”

Magnis Chairman Frank Poullas said: “India is one of the largest markets in the world for Lithium-ion batteries.”