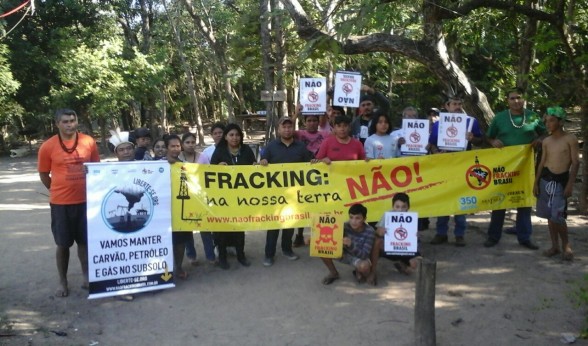 With Arapongas and São Manoel do Paraná approving the prohibition of the exploitation of shale gas by hydraulic fracturing, also known as fracking, a total of 72 cities in Brazil have freed themselves from one of the most harmful fossil fuel extraction practices for water, the environment and society.

This decision is unprecedented in Brazil because the legislative chambers mobilized against hydraulic fracturing even before the cities’ subsoil was sold for fracking.

Many of these local bans are a result of the debates, lectures, seminars and public hearings that the No Fracking Brazil campaign has been holding in the last three years in several regions throughout Brazil to warn the population about the risks and impacts of fracking.

“It is important to show the fracking entrepreneurs that people will not passively accept the destruction caused by the fossil fuel industry,” said Nicole Figueiredo de Oliveira of 350.org, which runs the campaign Nao Fracking Brasil.

“We will continue empowering the local communities to resist this government’s offensive and urging public officials to invest in renewable energy projects instead of expanding fossil fuel extraction, so that we can have a sustainable, secure future,” she added.

Auction rounds to sell licenses for commercial exploitation of shale gas by fracking have been held since 2013. With neither transparency nor wide consultation with civil society, the Brazilian government, through the National Agency of Petroleum, Natural Gas and Biofuels (ANP), is carrying out the proposal of selling the subsoil to the fossil fuels industry, the organization said.

Fracking is already destroying several places in locations such as the states of Texas and Louisiana in the United States, and the region of Vaca Muerta, in the Argentinean Patagonia, one of the world’s largest shale gas deposits, according to 350.org.

In the United States, besides the trail of destruction, fracking is causing hundreds of companies to fall into bankruptcy, pressured by a high demand for compensation, the high cost of technology and pressure from the American society against the use and pollution of water, against the radioactive waste and the intense earthquakes recorded.

Opposition to fracking is growing worldwide across cities, counties and states where people and local governments are organizing to prevent fracking from taking place in their territories. The technique has already been banned in countries like Germany, Scotland, France, Northern Ireland and Bulgaria.