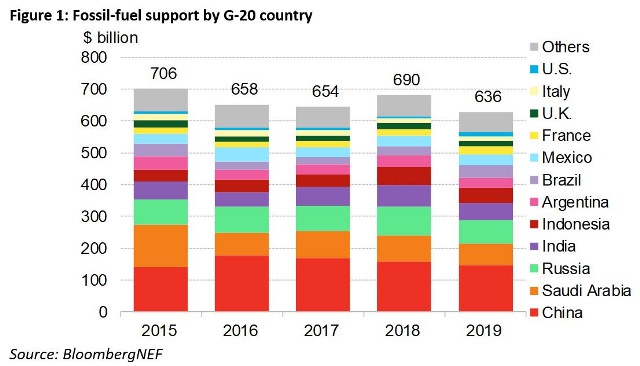 BloombergNEF’s Climate Policy Factbook has outlined the progress that each G-20 member country has made toward moving to a low-carbon economy.

The report found that the policies of many G-20 countries were significantly off course in order to limit global warming to 1.5 degrees Celsius.

What governments need to do?

Phasing out support for fossil fuels, particularly coal, and shifting funding to renewables is core to the COP26 goals and a crucial step to accelerating the clean energy transition. The report finds that governments of all 19 individual country members of the G-20 continue to provide substantial financial support for fossil-fuel production and consumption.

Though G-20 governments have announced climate commitments to reach the goals of the Paris Agreement, those same countries have continued providing support for coal, oil, gas, and fossil-fuel power, including $3.3 trillion between 2015 and 2019. At today’s prices, that sum could fund 4,232GW in new solar power plants – over 3.5 times the size of the current U.S. electricity grid.

However, to remain in line with the Paris Agreement goals in the lead-up to COP26, the G-20 cannot rely on the actions of a few nations. Every G-20 country must take immediate action to end support of fossil fuel projects and accelerate their coal phaseouts.

During the same timeframe (2015-19), eight members increased their support – notably Australia, Canada, and the U.S. – encouraging the use and production of fossil fuels, distorting prices, and risking carbon ‘lock-in’ – where assets funded today continue to emit high levels of emissions for decades ahead.

G-20 countries must implement emission pricing mechanisms to hold polluters accountable for the true social cost of their actions to effectively lead the phaseout of coal and other fossil fuels ahead of COP26.

12 G-20 countries have established nationwide prices on greenhouse gas emissions either by a carbon tax or market-based mechanisms, with France and Germany making the most progress in terms of share of emissions covered by a carbon tax or market. This is partially due to their participation in the E.U. Emissions Trading System (ETS), and their own national policies that increased the share of emissions covered by an emission price.

Eight of the countries that have adopted emission pricing have produced mixed results due to lax policies, with either the carbon price set too low or the concessions to emitters too generous. For example, in the U.S., state-level programs cover less than one-tenth of national emissions, collectively, and prices are relatively low. Several G-20 countries, such as Saudi Arabia, Russia, and Brazil, have yet to put a price on greenhouse gas emissions.

Enforcing globally accepted climate-risk disclosure frameworks, like that of the Task Force on Climate-related Financial Disclosures (TCFD), is critical to ensuring climate risks and opportunities are assessed accurately, so financial institutions can consider and price the impact of climate externalities into their credit risk and valuation models.

“Given that the G-20 accounts for nearly three-quarters of global emissions, progress from those governments in these three areas would mark a huge step forward toward tacking climate change,” said Victoria Cuming, head of global policy at BloombergNEF and lead author of the factbook.