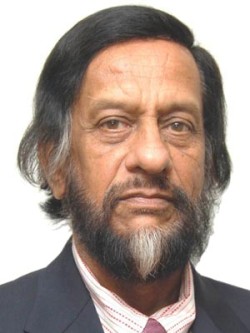 The Intergovernmental Panel on Climate Change (IPCC) elected South Korean academician Hoesung Lee as its new chair on Tuesday to succeed Rajendra Pachauri, who resigned amid allegations of sexual harrassment in India.

Lee takes over the leadership of the IPCC at a crucial phase of the global warming debate when the UN Climate Change Conference meets in Paris next month. The meeting aims at getting all nations to adopting a legally binding and universal agreement on climate, with each committing itself to a plan for reducing its carbon emissions. While the conference will have a separate leadership, the IPCC guides the debate and lays out the pathways to controlling global warming.

“The next phase of our work will see us increase our understanding of regional impacts, especially in developing countries, and improve the way we communicate our findings to the public,” Lee said. “Above all, we need to provide more information about the options that exist for preventing and adapting to climate change.”

Lee, who was one of the three vice chairs of the IPCC, is a professor in the economics of climate change, energy and sustainable development at Korea University’s Graduate School of Energy and Environment.

Ban’s spokesperson said he welcomed Lee’s election and “looks forward to the IPCC’s new leadership at this critical moment when governments are preparing for the global climate change conference in Paris later this year”.

Lee was elected by 78 votes to 56 in a run-off with Jean-Pascal van Ypersele at the election held in Dubrovnik, Croatia, at the IPCC’s 42nd Session. Six candidates, including an American, contested the election for the post.

Pachauri’s 13-year leadership of the IPCC ended in February when he resigned amid allegations of sexual harassment of an employee of The Energy and Resources Institute (TERI) in Delhi that he also heads. A criminal case is pending against him and an internal committee of TERI found him guilty of harassment.

While he headed the IPCC, he received the Nobel Peace Prize on behalf of the organisation in 2007. Former US vice president Al Gore shared the award.

Pachauri presided over the IPCC’s production of several landmark reports sounding an alarm for the future of the world because of climate change and global warming. He came under attack from some conservative groups that doubted climate change or its effects as well as some industry organisations. Equally, some environmental groups said he was not doing enough or wasn’t adequately aggressive.

In his resignation letter sent to Ban, Pachauri said, “I have endeavoured to uphold and enhance the scientific credibility of the panel, its escalating policy relevance and the robustness of its work, supported by and contributed to by the best scientific expertise from all over the world.”

After his resignation, a vice chair, Ismail El Gizouli was made the interim chair.